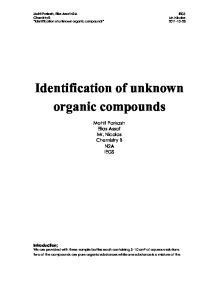 The purpose of this lab is to identify two different unknown organic compounds, through investigating different chemical properties by various experiments. The chemicals could be alkanes (hexane), alkenes (hex-1-ene) or alcohols (methylpentan-1-ol or hexa

will have a less a B.P due to branched chains. 7. The boiling points needs to be tested by heated up in paraffin oil, because it has a higher boiling point than the alcohols, if the alcohols would be heated up in water, the substance would not get any warmer than 100oC because water evaporates at a temperature over 100 oC. 8. After having the first 2 substances identified, the 3rd unknown liquid can be determined since it is a mixture of the substances you have identified. Results; Different Chemical experiments Substance: Bromine Water Water Solubility Boiling Point Concluded name of substance: A56 No reaction Cloudy, insoluble 144oC Methylpentan-1-ol B56 Decolorization Insoluble Not tested Hex-1-ene A + B56 Not tested Not tested Not tested Methylpentan-1-ol + Hex-1-ene =? Equations; Sample A + Br2 --> No reaction Sample B + Br2 --> Decolorzation Sample A + H2O --> Cloudy, Not really dissolved Sample B + H2O -->No reaction, Insoluble/2 layers Sample A + Water bath (80oC) --> No boiling, Not an alkane Conclusion; From the results it can be concluded that one of the organic compounds given were Hex-1-ene and Methylpentan-1-ol. To determine Hex-1-ene the properties for alkenes had to be tested. ...read more.

Another thing we could have done better is that we could have stirred the paraffin oil when checking for the boiling point of the alcohol. It would be good to stir the oil so the heat is equally distributed, since the Bunsen burner just has a flame straight up into the middle of the beaker which makes the oil hotter in the middle than around it. Another inaccuracy with the paraffin oil could be that the oil got heated up to fast due to a high flame from the Bunsen burner. The high flame may be too hot so the paraffin oil heated up but the thermometer was not fast enough to show the actual temperature of the paraffin oil. Overall we are pleased with the results and the way the experiment was carried out. The results were fairly accurate of the experiments. To make this experiment more interesting we could have investigated other chemical properties, for example doing the match test for alcohols to get a full understandable knowledge about testing for unknown organic chemicals. ?? ?? ?? ?? Mohit Parkash, Elias Assaf N2A IEGS Chemistry B Mr. Nicolas "Identification of unknown organic compounds" 2011-10-28 ...read more.

The candidate has written up an experiment they carried out to identify unknown substances. They included all the required sections - an introduction, method, results, conclusion, and evaluation. However, they have written the method and results sections out twice - ...

The candidate has written up an experiment they carried out to identify unknown substances. They included all the required sections - an introduction, method, results, conclusion, and evaluation. However, they have written the method and results sections out twice - proof checking should have spotted this, and their method lacks detail and a labelled diagram. However, they have used their results to identify the substances correctly and so come to a well-supported conclusion, and as part of this did an additional test on one substance to double check their results, showing a thorough, scientific approach.

The candidate has carried out several tests, and used their results to analyse the substances. However, they do not appear to have thoroughly understood the tests - for example claiming that the fact that one substance did not boil at 75 degrees meant that it must be an alcohol - to support this they should have given the boiling points for all the substances and thus decided that the only ones above 75 degrees were alcohols, or described how they have eliminated the other possibilities (by earlier tests). This section of the report could have been written more clearly to clarify this.
One test they have clearly understood and analysed well is the bromine test for unsaturation - they have given a very good explanation of the reaction. They have also shown knowledge of advanced chemistry by describing the differences in boiling point between branched and unbranched molecules.

The candidate's spelling, punctuation, and grammar is very good throughout. However, their explanations and descriptions could have been clearer as they tended to use long sentences where a short bullet point or table could have been used, and often repeated themselves. Although headings have been used throughout, some information was still in the wrong sections, for example explanations of the chemistry behind the reactions were spread all over the report and often repeated, and all the information about reducing errors was included in the evaluation rather than in a 'reducing errors' section in the method. They have also not stuck to convention to give a fully detailed method - instead they simply order you to 'test the solubility' with no indication as to how to do this. A scientific report should allow the reader to precisely copy the author's method, and so needs more detail.
they have ended the report well by suggesting one way to further develop on their analysis, having mentioned possible causes of errors.
Overall, their quality of writing is acceptable, but the report needs proof reading and more detail.