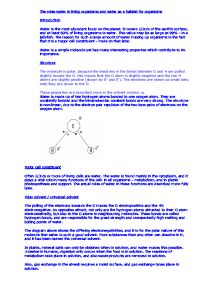 The roles water in living organisms and water as a habitat for organisms Introduction Water is the most abundant liquid on the planet. It covers 2/3rds of the earth's surface, and at least 60% of living organisms is water. This value may be as large as 99% - in a jellyfish. The reason for such a large amount of water making up organisms is the fact that it is a major cell constituent - more on that later. Water is a simple molecule yet has many interesting properties which contribute to its importance. Structure The molecule is polar, because the electrons in the bonds between O and H are pulled slightly toward the O. this means that the O atom is slightly negative and the two H atoms are slightly positive (shown by ?+ and ?-). The electrons are shown as small dots; note they are closer to the O. These properties are described more in the solvent section. db. Water is made up of two hydrogen atoms bonded to one oxygen atom. They are covalently bonded and the intramolecular covalent bonds are very strong. The structure is non-linear, due to the electron pair repulsion of the two lone pairs of electrons on the oxygen atom. Major cell constituent Often 2/3rds or more of living cells are water. The water is found mainly in the cytoplasm, and it plays a vital role in many functions of the cell: in all organisms - metabolism, and in plants photosynthesis and support. The actual roles of water in these functions are described more fully later. Polar solvent / universal solvent The pulling of the electrons towards the O makes the O electropositive and the H's electronegative. As opposites attract, not only are the hydrogen atoms attracted to their O atom electrostatically, but also to the O atoms in neighbouring molecules. These bonds are called hydrogen bonds, and are responsible for the great strength and unexpectedly high melting and boiling points of water. ...read more.

This mutual attraction explains why water is a liquid at standard temperature and pressure (STP) whereas other, similar sized, non- polar molecules like methane (CH4), ammonia (NH3) and hydrogen sulphide (H2S) is gases. The hydrogen bonds are weak individually but the sheer number of them means that the total force keeping the molecules together is considerable. The hydrogen bonds in water are broken when energy is supplied, e.g. when water is heated. When they break the liquid becomes a gas (vapour). At 00c and below the H - bonds are at their shortest and strongest and lined up to form an open regular crystalline structure, which is ice. Diagram of water molecules forming hydrogen bonds: Water is an unusual substance, mostly due to its hydrogen bonds; its properties allow it to have different abilities. Water can dissolve polar or ionic substances and can keep them in solution because of water's own polar properties. Substances that dissolve in water are known as hydrophilic substances. Ionic substances such as sodium chloride, NaCl, are made up of positive and negative ions. Sodium chloride is held in its structure by the strong attraction between its positive sodium ions and negative chloride ions. Normally these ionic attractions require a large amount of energy to break but when put into water the negative oxygen side of the water molecules cluster around the positive sodium ions Na+ and the positive hydrogen atoms cluster around the negative chloride ions Cl-. The attraction between the Na+ and Cl- ions is weakened as the ions are separated. Diagram of sodium chloride dissolving in water: Water can also separate covalently bonded molecules such as glucose and sucrose because the polar hydroxyl groups (- OH) in its structure forms hydrogen bonds with the water separating the molecules from each other. As you can see the chemical structure of water determines its properties. The following table lists these properties with examples of their biological importance. ...read more.

The cohesive properties of water allows plants to pull up water through xylem vessels from the roots to the leaves, this is called the transpiration stream. It also means that the water molecules where the water meets the air will be tightly held together and the water molecules below them to form an elastic film known as surface tension. Small creatures can get stuck in the surface water because they cannot break the water surface tension, creatures like pond skaters can move across the surface of the water without sinking as they have hydrophobic feet which stops them from breaking the surface tension. Diagram of surface tension: A pond skater standing on the surface of pond water. This was photographed through an interferometer, which shows interference patterns made by a pond skater as it walks on the water's surface. The surface tension of the water means the pond skater never breaks through the surface. Incompressibility: - Because of water's strong hydrostatic forces water is incompressible. This provides support for soft-bodied creatures such as worms slugs and jellyfish, which therefore do not require a supporting skeletal system. Water allows cells filled with water to become turgid and due to its incompressibility plants can support themselves. Roles of water in the environment: - Water is very important as an environment for living organisms to live in e.g. fish, insects. Some organisms spend the whole of their life cycles in water and are totally dependent on it (e.g. fish), whilst others are only dependent for part of their life cycles, usually the reproductive phase e.g. amphibians, mosses. Soft bodied creatures such as jellyfish are made of up to 96% water. Water also provides an environment for organisms to live in, 75% of the earth is covered in water. Conclusion: - In conclusion water's unique properties make it perhaps the most biologically important substance on the planet. No other substance shares similar properties to water and in the way that one single molecule can possess such varied and essential characteristics. ...read more.

*****
A very clear explanation of why the chemical and physical properties of water help make it so important for living organisms.