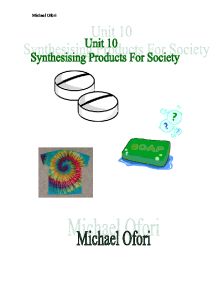 the synthesis of azo dyes, aspirin and soap

Introduction The reason why I selected these three compounds which are azo dyes, aspirin and soap is because: > In the aspect of chemistry, they all have different functional groups and molecular shapes associated with different functions. > They are all demanded in the modern world commercially. > They are easy and an affordable way of making in the college lab with minor hazards. The aims of this unit is to: > A clear awareness of a variety of different functional groups and their reactions. > A brief understanding of the reaction mechanism involved in each reaction as well as the shape importance of the molecule relating to it's use. > An in depth insight of the organic synthesis as well as the gradual steps involved in making the product, including the issue of equilibrium reactions and predicted yield. > Familiarize myself with the different apparatus as well as materials used in the organic synthesis, and their limitations with regardless of yield. > Show good comprehensive knowledge of the commercial importance of organic compounds and the economic imperatives involved in producing such compounds. AZO DYES 1) Introduction There are different types of dyes. A dye is used to impart color to materials of which it becomes the integral part. They give bright, high intensity colors that can even supply a complete rainbow of colors. Azo dyes are highly important commercially as they are used in the textile industry as acid dyes for wool and their affinity for cotton is increased by the number of auxochromes or azo groups. Auxochromes are groups in a dye molecule that influences the color due to the chromophore. They are groups, such as -OH and -NH2, containing lone pairs of electrons that can be delocalized along with the delocalized electron An azo group is a -N=N- group that is a chromophore (A chemical group capable of selective light absorption resulting in the coloration of certain organic compounds.) Azo dyes are also used as pigments and in color photography. ...read more.

As seen above, all two have a six membered ring structure, which tends to avoid the polar environment of water and a comparatively small appended group of atoms and are able to bond to part of their receptor molecule. The similarity in the structure of these molecules is clearly obvious and from their similar pain killing actions so therefore, we can assume that they both can fit into similar active sites even before the details of their active sites have actually been determined. SOAP 1) Introduction The term "soap" is a class name for the sodium and potassium salts of stearic acid, C17H35 COOH, and other fatty acids. Soaps are and have been there for centuries, made by the addition of hot concentrated aqueous sodium hydroxide solutions to fats such as glyceryl stearate. In the world every year, about 500,000,000 soaps are produced. Generally, soaps are used for bathing and washing clothes. It works by lowering the surface tension of water, by softening grease, and by absorbing dirt into the foam. Soaps come in three different states: which are the powder, liquid and bar forms. Some liquid soaps are very thick as well as sticky so they are called gels. The first step in manufacturing all the three forms of soap is the right selection of the raw materials as well as considering that if they can react accordingly with other ingredients and are also safe for humans if accidentally consumed. Also environmental safety is considered as precaution. 2) Synthesis In laboratory synthesis, the sodium and potassium salts of fatty acids, from which soaps are prepared, consist essentially of the glycerol esters of these acids. In soap manufacture or commercial synthesis, the oil or fat is heated with dilute aqueous sodium hydroxide or potassium hydroxide in large vats. When hydrolysis is complete, the soap is salted out which is then treated with different fragrances . ...read more.

Now with a measuring cylinder, 20.0cm3 of aqueous sodium hydroxide (3M concentration) was accurately measured and put into the heat resistant conical flask which had the ester in. This started to create a precipitate. The mixture was carefully heated up by the Bunsen burner to simmer it and also, with cautions of not boiling over for about ten minutes. After the tenth minute the bunsen burner was turned off and the mixture was allowed to cool down. Collection Of the Final Product (Soap) Following hydrolysis, some amounts of the soap was already precipitated but some was still in the solution. Using the saturated sodium chloride, the soap was precipitated in the solution. This was started by using 10cm3 of saturated sodium chloride, swirling the flask gently. The precipitate (soap) was allowed to settle for a few minutes and then filtered in the filter funnel using the filter paper to separate the solid and liquid was collected in a beaker. The solid soap was left in the filter to continue filtering which took quite a bit of time. The liquid collected in the beaker was discarded and a preliminary weight measurement of the soap was taken. The mixture was allowed to dry out naturally and in a few days time, the final weight of the soap was accurately taken and recorded as the final mass of soap obtained. Calculations Mass Of soap obtained (g) 7.28 grams Molar mass (g mol-1) (Sodium Oleate) 304 gram/mol-1 Number of moles of soap obtained (mol) 7.28�304=0.2023 Number of moles of soap theoretically obtained from stoichiometry (mol) Mol Of ester 7.32 M. mass of oleic acid 884 =8.2805�10-3 � 3 = 0.2024 mols Percentage Yield Mass Obtained 7.28 Theo. Mass 8.2805 =0.879�100= 87.9% The % yield was a bit high may be because there wee some impurities in it. Testing The Soap In testing the soap, a little portion was broken from it after calculating the percentage yields and other calculations and then was put in a test tube. Water was then put in it to see if it would react with it and produce foam which it did. ...read more.