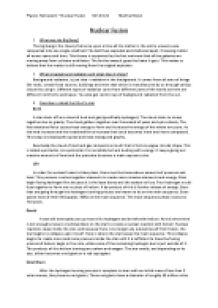 The Universe and Nuclear Fusion

The big bang is the theory that once upon a time all the matter in the entire universe was compacted into one single small ball. The ball then exploded and shattered apart, throwing matter all across space and time. This theory is supported by the fact we know that all the galaxies are moving away from us faster and faster. The further away it goes the faster it gets. This makes us believe that the matter is still moving from the original explosion.

Background radiation, is just that – radiation in the background. It comes from all sorts of things like rocks, certain food sources, buildings and even that which is manufactured by us through various industries using it. Different types of radiation come from different parts of the world as there are different rock forms and bases. You also get cosmic rays of background radiation from the sun.

A star starts off as a cloud of dust and gas (specifically hydrogen). The cloud starts to clump together due to gravity. The cloud gathers together over thousands of years and spins slowly.

A star will eventually use up most of its hydrogen and be left with helium. At this time there is not enough pressure crushing down on the star to create a nuclear reaction with helium. Nuclear reactions cease inside the star, and because there is no longer any outward push from fusion, the star begins to collapse upon its self. Here is where the star leaves the main sequence. This collapse begins to create more and more pressure inside the star until it is sufficient to have the fusing process of helium begin in the core, while some of the remaining hydrogen burns just outside of it. The products of this helium burning are carbon and oxygen. The star swells, and depending on its size, either becomes a red giant or a red supergiant.

After the hydrogen burning process is complete in stars with an initial mass of less than 8 solar masses, they become red giants. These red giants have a diameter of roughly 60 million miles. Helium is burning in the core producing oxygen and carbon, while a thin layer of hydrogen is burning around it where there is not sufficient pressure for helium burning. The red giant begins to brighten between 1,000 and 10,000 times.

Finally the remains of the explosion contract so much that it becomes so dense and there is nothing that can escape. There is so much mass in it, and the gravity is incredibly high. It begins to suck in anything around it, and soon not even light can escape its clutches. Soon, it can never be seen at all…

A protostar is when all the dust and gas has been gathered together. It is in a vague star shape but has not yet gained enough heat or energy to perform nuclear fusion, although it does have a lot of gravity and rotational force.  The gravitational energy is converted into heat energy and it starts to become a main-sequence star.