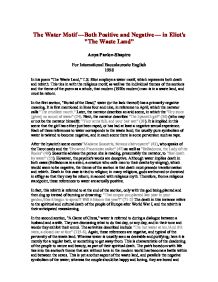 The Water Motif -Both Positive and Negative - in Eliot's "The Waste Land" Anya Pavlov-Shapiro For International Baccalaureate English 1998 In his poem "The Waste Land," T.S. Eliot employs a water motif, which represents both death and rebirth. This ties in with the religious motif, as well as the individual themes of the sections and the theme of the poem as a whole, that modern (1920s modern) man is in a waste land, and must be reborn. In the first section, "Burial of the Dead," water (or the lack thereof) has a primarily negative meaning. It is first mentioned in lines four and nine, in reference to April, which the narrator calls "The cruellest month." Later, the narrator describes an arid scene, in which the "Dry stone [gives] no sound of water" (24). Next, the narrator describes "The hyacinth girl" (36) (who may or not be the narrator himself): "Your arms full, and your hair wet" (38). It is implied in this scene that the girl has either just been raped, or has had at least a negative sexual experience. Each of these references to water corresponds to the waste land; the usually pure symbolism of water is twisted to become negative, and in each scene there is some perversion such as rape. ...read more.

The river bears no empty bottles, sandwich papers, Silk handkerchiefs, cardboard boxes, cigarette ends Or other testimony of summer nights. The nymphs are departed. (173-179) A rat crept softly through the vegetation Dragging its slimy belly on the bank While I was fishing in the dull canal (187-9) This section, again, is a negative association with water. Now, the river is brown and deserted, with no evidence of the former happiness (sex) that happened on the riverbank, with the nymphs. The only sex now is referred to as "White bodies naked bodies on the low damp ground" (193), which implies lust and an unpleasant sexual experience, devoid of love. The fishing reference is an allusion to either the Fisher King, Buddha, or Jesus, which again ties water to the religion motif. The second major reference to water in this section regards two prostitutes washing their feet: O the moon shone bright on Mrs. Porter And on her daughter They wash their feet in soda water (199-201) This is a perversion of Jesus washing the apostles' feet as an act of humility; here are two prostitutes, considered dirty and sinful, doing the same. ...read more.

In this passage, control refers to regaining control of your life, in particular to the Fisher King legend, in which a king's land falls to waste when he himself is diseased. This is paired with lines 423-6: I sat upon the shore Fishing, with the arid plain behind me Shall I at least set my lands in order? This means that the waste land is coming to an end, that the king is at last returning to health and returning to control. rain The rain image clearly overlaps and reinforces that of water * stirring Dull roots with spring rain * a shower of rain * if it rains, a closed car at four * dry sterile thunder without rain * a damp gust Bringing rain * the limp leaves Waited for rain dry The opening verses of 'The Hollow Men' use images of dryness very similarly to 'The Waste Land'. it does not represent simply death (which in Buddhist thought, is the supreme goal of Nirvana, only reached by the most enlightened beings), but a lack of real life, a dreadful, sterile limbo state devoid of redemption or spiritual meaning. * the dry stone * a little low dry garret * Her drying combinations * Sweat is dry * dry sterile thunder * dry grass singing * Dry bones can harm no one ...read more.