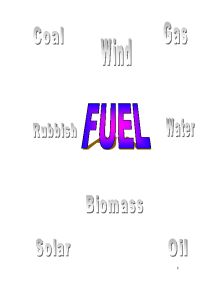 This is a mini-project on fuel - topics include petrol and fossil fuels.

TITLE PAGE NUM Fuel : Introduction 3 Coal 4 to 5 Gas 5 to 7 Oil 7 to 8 Engines 8 to 11 Nuclear Energy 11 to 12 Biomass 12 to 13 Rubbish 13 Sunshine 13 Wind 14 Water Power 14 Geothermal Power 15 Hydroelectric Power 15 Tidal Power 16 Energy in the Future 16 Summary 16 Picture Gallery 17-21 FUEL INTRODUCTION This is a mini-project on fuel. In this mini-project you are going to find out various topics about fuel. A few of these topics include petrol and fossil fuels. Your questions on fuel will all be answered. Fuel is a very interesting topic to write on. It might seem bizarre that I out of all topics I chose fuel. If you ever come across a book or project on something to do with fuel, do not think it is boring and throw it to a corner. Fuel is very fascinating, so pick the book/project and read it you might learn something from it. After all it is never too old to learn! Can you name some gases produced in gas wells? Well if you don't, after you read his mini-project you will be able to answer that question and also loads more questions. Now just sit back and relax and I hope you like my project. PS: Miss Murray, I know you might have loads more projects to get through or may have just marked a load of projects, so I will try my best not to take too long on this. COAL People have used coal for cooking and heating fir thousands of years. During the 19th century, coal was the world's most important fuel. It powered the steam engines that made the Industrial Age possible. Today coal is still used in vast amounts. Most coal is burned at power stations to produce electricity, and burning coal meets much of the world's energy needs. ...read more.

These work in sequences to produce continuous movement. * Crankshaft changes the up-and-down movement of the pistons into circular movement, which drives the wheel. Electric Motors Petrol and diesel engines produce waste gases that pollute the air and contribute to the greenhouse effect (which causes the Earth's temperature to rise). Electric motors are clean quite and produce no pollution. Several car manufacturers are developing cars powered by electric motors. Most electric cars are still experimental; one remaining problem is that sufficiently light, efficient batteries have not yet been developed. Jet Engine The jet, or gas turbine, engine now powers most high-speed aircraft. The engine blasts a jet of hot, fast-moving air backward out of its exhaust; this pushes the engine forward. Fan at the front of the engine spin and suck air into the engine and squeeze it at high pressure into several combustion chambers. There, flames of burning kerosene heat the air, which expands and rushes towards the exhaust. As the air streams out, it spins the turbine, which drives the fan at the front of the engine. Some things you may find in a jet engine are: * Some of the air that enters the engine flows through the bypass duct. * Large fan spins, sucking air into the engine. * Compressors-fast-spinning fans- increases the pressure of the air and pushes it into the combustion chambers. * Hot air and exhaust gases rush out of the engine, spinning the turbine as they go. * Burning kerosene fuel inside the combustion chambers heats the air and makes it expands violently. Frank Whittle In 1928, English pilot and engineer Frank Whittle (1907-) suggested the idea of the jet engine. Whittle's engine powered an experimental aircraft for the first time in 1941. However, the first jet-powered flight was made during the 1930s in Germany, where engineer Hans Von Ohain had developed his own engine. Steam Engine The steam engine was developed during the 18th century and greatly changed people's lives. ...read more.

Transformers at a substation then step up the electricity generated to the high voltage suitable for transmission. In areas where there are considered fluctuation in electricity demand, pumped- storage plant may be installed. The surplus power available at off-peak periods is used to pump water to a separate reservoir. At peak times, the stored water is released to generate extra electrical power. TIDAL POWER The tidal power station at La Rance in Brittany, France, opened in 1966, consists of a barrage blocking the 750-m (2460-ft) wide estuary of the River Rance. The tidal waters are channelled through 24 tunnels in the barrage. Each tunnel houses a reversible turbine generator that can operate efficiently both on the flood side (when the water flow is from the sea to the basin) and on the ebb tide (from basin to sea). At high, the sluices are closed, trapping the water in the tidal basin. The water can then be released to turn the turbines when the tide is low but when demand for power is high. Each of the 24 turbines can generate upto 10MW-the total output of the plant being sufficient to satisfy the needs of around a million consumers. ENERGY IN THE FUTURE No single form of renewable energy is likely to be as dominant in the future as oil and coal have been in the past. Taken together, however such sources could answer most of the world'' needs, replacing fossil fuels as they run out or become environmentally unacceptable. If fuel saving measures such as improved insulation and waste-heat recovery are also widely implemented; it may that our energy needs will fall even as our prosperity grows. SUMMARY Overall fuel is a very important thing. Our lifestyles will be totally different without fuels because we would not have any electricity, gas etc. There are lots of people in this world who are suffering without fuels. I think in the future people would not realise the importance of fuel as we do now. 16 1 ...read more.