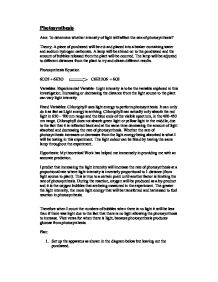 To determine whether intensity of light will affect the rate of photosynthesis?

Photosynthesis Aim: To determine whether intensity of light will affect the rate of photosynthesis? Theory: A piece of pondweed will be cut and placed into a beaker containing water and sodium hydrogen carbonate. A lamp will be shined on to the pondweed and the amount of bubbles released from the plant will be counted. The lamp will be adjusted to different distances from the plant to try and obtain different results. Photosynthesis Equation 6CO2 + 6H2O C6H12O6 + 6O2 Variables: Experimental Variable- Light intensity is to be the variable explored in this investigation. Increasing or decreasing the distance from the light source to the plant can vary light intensity. Fixed Variables: Chlorophyll uses light energy to perform photosynthesis. It can only do it as fast as Light energy is arriving. Chlorophyll can actually only absorb the red light in 650 - 700 nm range and the blue ends of the visible spectrum, in the 400-450 nm range. Chlorophyll does not absorb green light or yellow light in the middle, due to the fact that it is reflected back and at the same time decreasing the amount of light absorbed and decreasing the rate of photosynthesis. ...read more.

Due to the high rates of photosynthesis of the pondweed, readings should be taken within shorter time periods. I had originally chosen to count the number of bubbles in two minute but these produced miscounts in the readings. If during a repeated experiment, counting bubbles is still used, there is a smaller chance for human error when counting within a smaller time frame. If the capillary tube option was to be chosen, volume should be measured for a smaller time frame to reduce the overall time to complete the experiment. Due to the nature and convenience of the experiment, it could be easily modified to investigate another variable of photosynthesis. Since sodium hydrogen carbonate (NaHCO3) is used to provide the pondweed with carbon dioxide. Performing the experiment with different volumes of NaHCO3 could vary the amount of CO2. The plant would be kept at a constant distance from the lamp and a constant volume of water would be added to the sodium hydrogen carbonate. Although I feel that my experiment was sound overall, I thought there were many points at which the accuracy was not perfect. As I have already stated, mostly due to the fact that I was relying on all the bubbles being the same size, which they clearly weren't, however many of the smaller inaccuracies also apply to my main experiment. Written By L Itam ...read more.