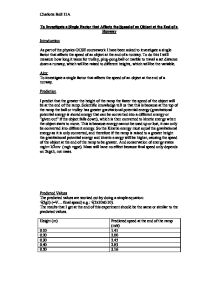 As part of the physics GCSE coursework I have been asked to investigate a single factor that affects the speed of an object at the end of a runway. To do this I will measure how long it takes for trolley, ping-pong ball or marble to travel a set distance down a runway, which will be raised to different heights, which will be the variable.

To investigate a single factor that affects the speed of an object at the end of a runway.

I predict that the greater the height of the ramp the faster the speed of the object will be at the end of the ramp. Scientific knowledge tell us that this is because at the top of the ramp the ball or trolley has greater gravitational potential energy (gravitational potential energy is stored energy that can be converted into a different energy or “given out” if the object falls down), which is then converted to kinetic energy when the object starts to move. This is because energy cannot be used up or lost, it can only be converted into different energy.

Time in seconds it took the object to

travel down the ramp

Using these preliminary results, we decided that we would use the object with the greater range of results, which was the ping pong ball.

Reasons for using these Apparatus:

Stop clock: we decided to use a digital stop clock, as it would be more accurate than an analogue one, as the readings would be digital.

Metre Rule: Using a metre rule to measure the length of the ramp was more accurate than using, for example and 15cm ruler, as you could measure greater distances at a time instead of moving the ruler.

Light sensor attached to a computer,

A way to raise the ramp.

You could also use something that would release the ball, to ensure that there is no human error, e.g. if the human accidentally pushed the ball a bit down the ramp, this would make the results unreliable.

Other than these possible reasons I can conclude that the experiment was conducted as fairly and accurately as possible with the equipment and conditions that we were operating in and that the results and the data collected are as accurate as possible, however there are ways in which the experiment could have been improved, as shown above.