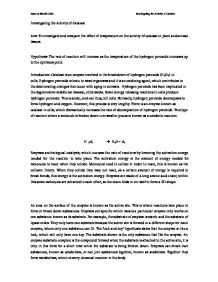 To investigate and compare the effect of temperature on the activity of catalase in plant and animal tissues.

Investigating the Activity of Catalase Aim: To investigate and compare the effect of temperature on the activity of catalase in plant and animal tissues. Hypothesis: The rate of reaction will increase as the temperature of the hydrogen peroxide increases up to the optimum point. Introduction: Catalase is an enzyme involved in the breakdown of hydrogen peroxide (H2O2) in cells. Hydrogen peroxide is toxic to most organisms and it is an oxidizing agent, which contributes to the deteriorating changes that occur with aging in animals. Hydrogen peroxide has been implicated in the degenerative middle ear disease, otitis media. Some energy releasing reactions in cells produce hydrogen peroxide. This is acidic, and can thus, kill cells. Normally, hydrogen peroxide decomposes to form hydrogen and oxygen. However, this process is very lengthy. There is an enzyme known as catalase in cells, which dramatically increases the rate of decomposition of hydrogen peroxide. This type of reaction where a molecule is broken down into smaller pieces is known as a catabolic reaction. H202 --> H20 + 02 Enzymes are biological catalysts, which increase the rate of reactions by lowering the activation energy needed for the reaction to take place. The activation energy is the amount of energy needed for molecules to react when they collide. Molecules need to collide in order to react, this is known as the collision theory. When they collide they may not react, as a certain amount of energy is required to break bonds, this energy is the activation energy. Enzymes are made of a long amino acid chain; within this some molecules are attracted to each other, so the chain folds in on itself to form a 3D shape. An area on the surface of the enzyme is known as the active site. This is where reactions take place to form or break down substances. Enzymes are specific which means a particular enzyme only works on one substance known as its substrate. ...read more.

When the correct temperature is reached add the hydrogen peroxide into the delivery tube containing the potato. 21. Replace bung immediately and start timing. Every 30 seconds measure the amount of oxygen released using the graduated measuring cylinder and record the results in a table. 22. Rinse out delivery tube and clean using a bottlebrush. 23. Measure another 3g of potato. 24. Now set up the water bath at 30�C and place the boiling tube labelled as 30�C and the clean delivery tube in the water bath. Make sure delivery tube is clamped in. 25. Leave it in the water bath for approximately 4 minutes. Once the temperatures of the potato and hydrogen peroxide are equal, add the hydrogen peroxide to the delivery tube and place bung on top of the delivery tube immediately. Start the stopwatch and at intervals of 30 seconds for 5 minutes, measure the amount of oxygen evolved (measure the reduction in water). Record results in the table. 26. Repeat steps 22-25 for 20�C, 10�C and 60�C. 27. Repeat steps 15-25 one more time and take an average of the results Risk assessment: During this investigation, I will use catalase from liver and pea cells to speed up the breakdown of hydrogen peroxide. Hydrogen peroxide is an oxidizing agent, as oxygen will be given off during the reaction. This implies that it could aid in the burning of fires. Due to this, reasonable care must be taken to ensure that the oxygen is not directly exposed to the flame of the Bunsen burner while water is being heated. As well as this, hydrogen peroxide can be very harmful if it enters the eyes. Thus, goggles must be worn. Also lab coats will also be worn to protect skin. The blade, which will be used to cut the potato, is also another hazard. It must be handled with appropriate care, as it is sharp. ...read more.

The results are accurate because a narrow measuring cylinder was used, so the volume measured is more accurate. Hot and cold water were mixed to achieve accurate temperatures. An anomalous results occurred during the repeat reading of the 10�C experiment, the reading at 90 seconds is higher than that at 120 seconds. This reading was ignored when taking the average so It does not affect the analysis. It occurred because the measurement was misread, it may have been 0.1 cm3, instead of 0.2 cm3. Another anomalous result occurred during the first taking of the 50�C experiment, gas was released at 210 seconds when the experiment seemed to have stopped. The gas may have been trapped in the delivery tube and should have been released earlier in the experiment. This was taken into account when drawing the best fit line on the graph, so does not affect the analysis. The method used was good enough to achieve reliable readings , but it can be improved by measuring the mass of the gas lost, this would be more accurate as digital readings would be taken. Using a smaller frequency and a larger range of temperatures would give more evidence for the conclusion. However would require more time and equipment. Other improvements are, using thinner measuring cylinders, to measure out the hydrogen peroxide and the gas produced. Using a thermocouple thermometer to accurately measure the temperature. The hydrogen peroxide took time to heat up as the test tube is glass and is insulated. Using a better material would save time and would have allowed the plan to be completed. Using electronic equipment to take readings a exactly 30 seconds, would eliminate human error. Further work that would extend the investigation and give more evidence to the conclusion would be, to use different concentrations of hydrogen peroxide and lengths of potato, to see how these affect the rate of reaction. Using other substances with catalase, like liver, to see how enzyme concentration affects the rate. Amreen Khadri 12Be Investigating the Activity of Catalase ...read more.