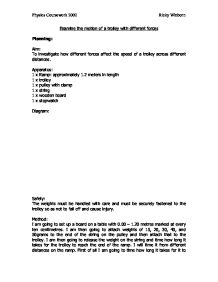 To investigate how different forces affect the speed of a trolley across different distances.

Examine the motion of a trolley with different forces

To investigate how different forces affect the speed of a trolley across different distances.

The weights must be handled with care and must be securely fastened to the trolley so as not to fall off and cause injury.

The gradient of the ramp

The person releasing the trolley and the weight

The force (weight on pulley)

The graphs I have drawn clearly show that as the distance the trolley has to travel is increased, so is the time taken.