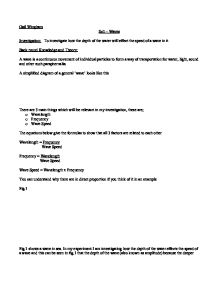 To investigate how the depth of the water will effect the speed of a wave in it.

Investigation:   To investigate how the depth of the water will effect the speed of a wave in it

Back round Knowledge and Theory:

A wave is a continuous movement of individual particles to form a way of transportation for water, light, sound and other such paraphernalia.

A simplified diagram of a general ‘wave’ looks like this

There are 3 main things which will be relevant in my investigation, these are;

Fig.1 shows a wave in sea. In my experiment I am investigating how the depth of the water effects the speed of a wave and this can be seen in fig.1 that the depth of the wave (also known as amplitude) because the deeper the water the longer the particles take to reach the bottom and travel back up to the top again. Frequency is measured in Hz which is another way of saying waves per

Two more important variables in this experiment are the height at which the tray is dropped and the amount of times you let the waves reflect back and forth. In both cases these variables must stay constant. The wave speed is likely to change according to the drop height of the tray because a tray dropped from a greater height will mean a greater force on the wave which according to the equation:

will give the wave a greater acceleration and speed. This variable can be kept the same by always dropping the tray from the same height as shown in fig 1. In

In my opinion my experiment was successful. It show the relationship between velocity and depth well and also help to prove my predictions but it is also true that my result were not completely exact and these could be due to a couple of things. One of them is that it was very hard to start with the exact same starting force each time because the speed at which I removed the ruler from beneath the tray of water would not have been completely constant. To have improved this is would have helped if I had measure the angle of elevation as well as the height of it because this would have help keep the starting force more accurate. Another thing that could have affected the end results was the accuracy of the timing as it was quite difficult to stop and start the stop clock at the exact times that waves began and hit the side of the tray for the third time. Unfortunately there is no easy solution to this and the only thing that really could be done in order to make the results more accurate would be to record more tests and so the average would be closer to the actually time.