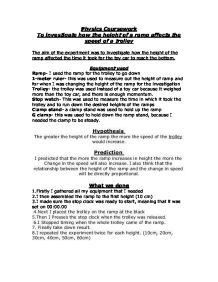 The aim of the experiment was to investigate how the height of the ramp affected the time it took for the toy car to reach the bottom.

Ramp- I used the ramp for the trolley to go down

Trolley- the trolley was used instead of a toy car because it weighed more than the toy car, and there is enough momentum.

G clamp- this was used to hold down the ramp stand, because I needed the clamp to be steady.

The greater the height of the ramp the more the speed of the trolley
would increase.

Evaluation of my conclusion

I think that my experiment went well over all and was reliable as I repeated it 2 times to get an average, also I made sure everything was accurate and my graph showed this because as I accepted there was a positive trend which lead to a solid conclusion. There is an increasing GPE as the height increases and therefore led to an increase in kinetic energy and speed. The trolley is at is at its highest point of 60cm it has the highest GPE then as the trolley drops to a lower level it loses GPE. However it gains the same amount of kinetic energy. If the kinetic energy increases it means the speed is increasing because the mass of the trolley went hence taking less time to reach to the bottom of the ramp.