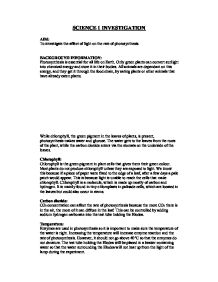 To investigate the affect of light on the rate of photosynthesis.

SCIENCE 1 INVESTIGATION AIM: To investigate the affect of light on the rate of photosynthesis. BACKGROUND INFORMATION: Photosynthesis is essential for all life on Earth. Only green plants can convert sunlight into chemical energy and store it in their bodies. All animals are dependant on this energy, and they get it through the food chain, by eating plants or other animals that have already eaten plants. While chlorophyll, the green pigment in the leaves of plants, is present, photosynthesis makes water and glucose. The water gets to the leaves from the roots of the plant, while the carbon dioxide enters via the stomata on the underside of the leaves. Chlorophyll: Chlorophyll is the green pigment in plant cells that gives them their green colour. Most plants do not produce chlorophyll unless they are exposed to light. We know this because if a piece of paper were fixed to the edge of a leaf, after a few days a pale patch would appear. This is because light is unable to reach the cells that make chlorophyll. Chlorophyll is a molecule, which is made up mostly of carbon and hydrogen. It is mainly found in tiny chloroplasts in palisade cells, which are located in the leaves but could also occur in stems. ...read more.

METHOD: Apparatus - lamp, beaker, test tube, Elodea, thermometer, timer. We collected the apparatus and set it up as shown below. To make sure our experiment was a fair test, we had to control everything around the experiment. The Elodea was placed in a test tube filled with water, and this was placed in a beaker containing water. This was so that the water could not heat up from the lamp, as this could affect the results. A thermometer was used to measure the temperature to make sure it was constant so that it was not too hot or cold. The light source was also controlled. Blinds were pulled down in the room so that the pondweed would only receive the light from the lamp. External light could provide extra energy, and this could therefore give us inaccurate results. Three reading were taken from each of the distances at which the plant was placed. The number of bubbles of oxygen produced was counted and also the size of them was recorded. The readings were taken for the duration of one minute. CONCLUSION AND ANALYSIS: From the results shown on the previous pages, we can plainly see that as the distance from the plant to the light source increases, the number of bubbles of oxygen released decreases. ...read more.

The counting of the bubbles of oxygen given off by the plant might not have been as accurate as possible because the bubbles were rising up very fast at the start (they slowed down as the light source was further away) and it was difficult to keep up the counting. It might have been better to weigh the amount of oxygen given out, and the way to do this is explained below: In this experiment, as the Elodea gives out the oxygen, it gets collected in the syringe. The more oxygen is present, the further back the plunger will go. This would be a more accurate way of measuring how much oxygen was given out because there would be no difficulties at measuring the number of bubbles, like there is when this experiment is done manually. The beaker containing water can still be moved to different distances, and the temperature can be kept constant by placing a glass block in front of the beaker. In order to expand this experiment, it might be wise to use a different species of plant, like possibly using a different water plant. We could also try varying something other than the light, i.e. carbon dioxide intake, temperature, or water supply. Again, we would have to make sure that all variables, apart from the experimental variable, were kept the same. ...read more.