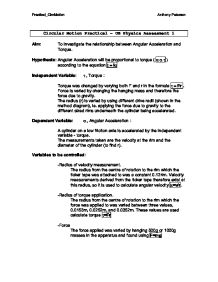 To investigate the relationship between Angular Acceleration and Torque.

Aim:         To investigate the relationship between Angular Acceleration and Torque.

Hypothesis: Angular Acceleration will be proportional to torque (α α τ) according to the equationτ = Iα

Torque was changed by varying both F and r in the formula τ = Fr .

Force is varied by changing the hanging mass and therefore the force due to gravity.

The radius (r) is varied by using different drive radii (shown in the method diagram), ie. applying the force due to gravity to the different sized rims underneath the cylinder being accelerated.

A cylinder on a low friction axle is accelerated by the independent variable - torque.

The measurements taken are the velocity at the rim and the diameter of the cylinder (to find r).

Variables to be controlled:

The radius from the centre of rotation to the rim which the ticker tape was attached to was a constant 0.124m. Velocity measurements derived from the ticker tape therefore exist at this radius, so it is used to calculate angular velocity α=v/r.

± 0.02 kgm² there is a large unexplained error. I was unable to identify the source of this error and cannot confidently attribute it to friction.

The graph Angular Velocity vs. Time was used solely to acquire several angular acceleration values for the Angular Acceleration vs. Torque graph.

However it does show the comparison of the angular acceleration caused by different masses combined with different drive radii.

The Angular Acceleration vs. Torque graph shows the important relationship; torque multiplied by 0.1 ± 0.02 kgm²  is equal to angular acceleration.

This constant must be equal to I, from the equation τ = Iα where Irepresents rotational inertia.

The graph is a straight line graph with a positive gradient, which means Angular Acceleration is directly proportional to Torque, as stated in the hypothesis.

The investigation was well designed, although error analysis was a problem.

Further investigations could include research into:

-the accuracy of ticker timers

-the accuracy of the way the ticker tape wraps around the rim of the cylinder/drum,

-the fluctuations of the cylinder’s radius.

This would enable use of absolute error to calculate derived errors for derived values such as Angular Acceleration.

The results are erroneous compared with the theoretical value of I. This is an error which can be investigated either to find the source of the discrepancy or the systematic error that caused this large difference in results.