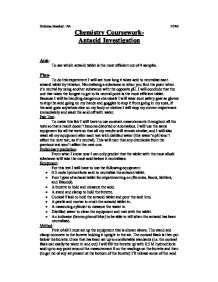 To see which antacid tablet is the most efficient out of 4 samples.

Nicholas Marshall 10A 3/7/02 Chemistry Coursework- Antacid Investigation Aim- To see which antacid tablet is the most efficient out of 4 samples. Plan- To do this experiment I will see how long it takes acid to neutralise each antacid tablet by titration. Neutralising a substance is when you find the point when it's neutral by using another substance with the opposite pH. I will conclude that the one that takes the longest to get to its neutral point is the most efficient tablet. Because I will be handling dangerous chemicals I will wear such safety gear as gloves to stop the acid going on my hands and goggles to stop it from going in my eyes, if the acid goes anywhere else on my body or clothes I will stop my current experiment immediately and wash the acid off with water. Fair Test- To make this fair I will have to use constant measurements throughout all the tests so that a result doesn't become distorted or anomalous. I will use the same equipment for all the tests so that all my results will remain similar, and I will also wash all my equipment after each test with distilled water (this water's pH won't affect the next test, as it's neutral). This will men that any chemicals from the previous test won't affect the next one. Preliminary prediction- From what I know now I can only predict that the tablet with the most alkali substance will take the most acid before it neutralises. Equipment- For this test I will have to use the following equipment: * 0.5 mole hydrochloric acid to neutralise the antacid tablet. * Four types of antacid tablet for experimenting on (Rennies, Boots, Settlers, and Bisodol). * A burette to hold and measure the acid. * A stand and clamp to hold the burette. * Conical Flask to hold the antacid tablet and pour the acid into. ...read more.

= 0.0122 (to 4 d.p) moles I predict that 0.0122 moles of HCl are needed to neutralise the Bisodol tablet. Boots: CaCO3 + 2HCL � CaCL2 + CO2 + H2O Mass of active ingredients = 0.5 g RFM= Ca= 40 relative atomic mass C= 12 relative atomic mass O3= 16 relative atomic mass x 3= 48 RFM= 40 + 12 + 48 = 100g Moles of antacid tablet = 0.5 � 100 = 0.005 moles Moles of HCl tablet should neutralise = 0.005 x 2 = 0.01 moles I predict that 0.01 moles of HCl (hydrochloric acid) are needed to neutralise the Boots tablet. Range and Type of Measurements- When doing my experiment I will take and record results in certain places. To get a consistent pattern I think that around 3 repetitions for each tablet will do. This will mean I'll have to take down 6 recordings for each tablet; 3 at the start of each test and 3 at the end of each test, the difference between each start and finish gives the volume of the acid needed to neutralise the tablet. Strategy- When doing my method I will have to do certain actions to get reliable results and to make it a fair test. Most of these actions have already been mentioned in my method but I will clarify them anyway. The first action I must do is to only let the acid in gradually otherwise when I reach the end point I may go over it if I'm letting too much in at one time, giving me an inaccurate and useless result. I must also only use distilled water while cleaning away the chemicals from a previous experiment because that water is neutral and so won't affect the outcome of the following experiment while normal water might giving me unreliable results, rendering the experiment unfair. I must obviously make my measurements as exact as possible, the more exact they are the fairer the test is and the better the results. ...read more.

I believe that my results were also reliable (apart from the Boots tablet) as I did the experiment properly following the method and fair test rules. It didn't cut corners to quicken the tests or make up the results; everything was applied. The reason that my Boots experiment went wrong is because I was rushed for time and so had to hurry in completing all 3 of the tests and that obviously must have made the experiment go wrong. It was either this or the calcium carbonate in the tablet was affected in some way by the other inactive ingredients or was wrong to begin with. I found that there were enough results in the end to read from because I managed to make a useful graph, confirming my prediction and see the patterns and trends of the tablets. If I was to do this experiment again there are a number of thing that I'd change. I've already said that I would add more equipment into the experiment, but I would also change the amount of water (10ml of water) or tablets used (only 1 tablet was used). Changing the amounts of each item to larger would give better accuracy but would also be more time-consuming or changing it to smaller amounts would save time but also be less accurate. At the moment the amounts were around the middle. Any further works would include repeating the experiment again to confirm my conclusion or to try and use the chemicals in the tablets as separate materials in their own experiments and see whether they work in the same way against the same acid as in this experiment. If it did that it would also confirm what I found out in my experiment. The main thing that I would like to do as further work though is to check whether the Boots tablet was an anomalous result or if it's just a useless tablet by using a series of different tests. ...read more.