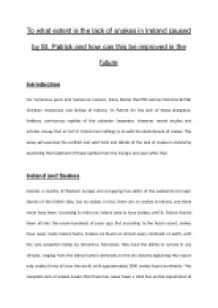 To what extent is the lack of snakes in Ireland caused by St. Patrick and how can this be improved in the future

ï»¿To what extent is the lack of snakes in Ireland caused by St. Patrick and how can this be improved in the future Introduction For numerous years and numerous reasons, many blame the fifth-century Romano-British Christian missionary and bishop of Ireland, St. Patrick for the lack of these elongated, limbless, carnivorous reptiles of the suborder Serpentes. However, recent studies and articles convey that in fact St. Patrick had nothing to do with the abolishment of snakes. This essay will examine the verified and valid facts and details of the lack of snakes in Ireland by examining the treatment of these reptiles from the Ice Age and years after that. ...read more.

This complete lack of snakes means that there has never been a total ban on the importation of snakes ever implemented, therefore the desire to own a pet snake can be fulfilled in this country. Ice Age The real reason for no snakes in Ireland can be summed up in two words, â€˜left behindâ€™. Snakes were left behind. Once the ice caps and woolly mammoths retreated back northward, snakes returned to northern and western Europe, spreading as far as the Arctic Circle. Britain, with its land bridge to mainland Europe until about 6500 years ago, was intensely colonised by three snake species: the venomous adder, the grass snake and the smooth silky snake. ...read more.

However, this chance of snakes is still unlikely due to the unwillingness from the Irish population. Having a new, deadly animal in their country means an increase in risk of being attacked by snakes. They are not necessarily the safest nor kindest animals and especially if frightened due to the new environment, being released from their homes in a house to the outdoors, could lead to violence. Moreover, Irelandâ€™s indigenous wildlife would not be prepared for the arrival of snake introducers, possibly wrecking the environment of areas in Ireland. Conclusion In conclusion, there are no snakes in Ireland. While the reason for this was previously unknown or falsely blamed on St. Patrick. However, fortunately due to recent studies and research we as a society are able to move forward and continue to expand our knowledge on the strange occurrences in Ireland. ...read more.