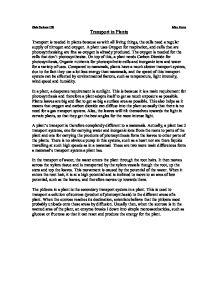 Transport is needed in plants because as with all living things, the cells need a regular supply of nitrogen and oxygen.

Chris Davison 12B Miss. Perret Transport in Plants Transport is needed in plants because as with all living things, the cells need a regular supply of nitrogen and oxygen. A plant uses Oxygen for respiration, and cells that are photosynthesising are fine as oxygen is already produced. The oxygen is needed for the cells that don't photosynthesise. On top of this, a plant needs Carbon Dioxide for photosynthesis, Organic nutrients for photosynthetic cells and inorganic ions and water for a variety of uses. Compared to mammals, plants have a much slower transport system, due to the fact they use a lot less energy than mammals, and the speed of this transport system can be effected by environmental factors, such as temperature, light intensity, wind speed and humidity. ...read more.

This also helps as it means that oxygen and carbon dioxide can diffuse into the plant so easily that there is no need for a gas transport system. Also, the leaves will tilt themselves towards the light in certain plants, so that they get the best angles for the most intense light. A plant's transport is therefore completely different to a mammals. Actually, a plant has 2 transport systems, one for carrying water and inorganic ions from the roots to parts of the plant and one for carrying the products of photosynthesis form the leaves to other parts of the plants. ...read more.

This movement is caused by the potential of the water. When it enters the root hair, it is at a high potential and is inclined to move to an area of low potential, such as the leaves, and therefore moves up towards them. The phloem in a plant is the secondary transport system in a plant. This is used to transport a solution of sucrose (product of photosynthesis) to the different areas of a plant. When the sucrose reaches its destination, scientists believe that the phloem most probably unloads onto these areas by diffusion. Usually then, when the sucrose is in the wanted area of the plant, an enzyme breaks I down into simple monosaccharides, such as glucose or fructose so that it can react and produce the energy for the plant. ...read more.