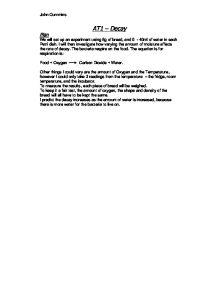 We will set up an experiment using 8g of bread, and 0 - 40ml of water in each Petri dish. I will then investigate how varying the amount of moisture affects the rate of decay. The bacteria respire on the food.

AT1 - Decay Plan We will set up an experiment using 8g of bread, and 0 - 40ml of water in each Petri dish. I will then investigate how varying the amount of moisture affects the rate of decay. The bacteria respire on the food. The equation is for respiration is: Food + Oxygen Carbon Dioxide + Water. Other things I could vary are the amount of Oxygen and the Temperature, however I could only take 3 readings from the temperature - the fridge, room temperature, and the incubator. To measure the results, each piece of bread will be weighed. To keep it a fair test, the amount of oxygen, the shape and density of the bread will all have to be kept the same. I predict the decay increases as the amount of water is increased, because there is more water for the bacteria to live on. Obtaining Experiment 1 Weight Before Decay/g (Including weight of water and Perti dishes) ...read more.

of water, such as 40ml, the decay went down again because there was too much water to too little oxygen, so the bacteria could not reproduce as fast, as the conditions were too anaerobic when the bread was waterlogged. If there is no oxygen, the organisms causing the decay cannot grow. However we didn't have the equipment in the lab to test this. The end results however were correct, but I think the main reason that they had lost so much mass was evaporation. The Petri dish was designed so that water vapour could escape, gasses could exchange, but no bacteria could get in. Conclusion The amount of mould went up as the water was increased to 20ml, before dropping with 30 and 40ml of water. Evaluation The two sets of results obtained were quite different, for example on the first experiment, the reading for after the decay was 31.6g(with 30ml of water), and while on the second experiment it was 84.5g. ...read more.

Also, if there was a draft, the rate of evaporation would have been speeded up, which could have explained decrease in mass, such as from 60.2g to 43.0g, in the first experiment, on the 40ml reading. Although the overall trend was the same in both experiments, that the decay initially larger as more water was added, then decay decreases again as water is increased further, the results were significantly different. This could be because of factors out of our control, such as the amount of oxygen present; it was impossible to measure, as we did not have the equipment to do this. Finally, it had to be assumed that the density of every piece of bread used was the same. This was probably not true, as some pieces of bread were taken from different slices, but within the same packet. For further work, I would investigate using a different method to asses the decay, such as find out the surface area of the bread, and finding out the amount infected, to give a percentage cover. Using transparent mm2 graph paper could do this. John Cummins ...read more.