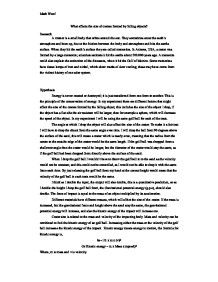 What affects the size of craters formed by falling objects?

What affects the size of craters formed by falling objects? Research A meteor is a small body that orbits around the sun. They sometimes enter the earth's atmosphere and burn up, due to the friction between the body and atmosphere and hits the earths surface. When they hit the earth's surface they are called meteorites. In Arizona, USA, a crater was formed by a large meteorite; scientists estimate it hit the earths about 500.000 years ago. A meteorite could also explain the extinction of the dinosaurs, when it hit the Gulf of Mexico. Some meteorites have dense lumps of iron and nickel, which show marks of slow cooling; these may have come from the violent history of our solar system. Hypothesis Energy is never created or destroyed; it is just transferred from one form to another. This is the principle of the conservation of energy. ...read more.

When I drop the golf ball I wouldn't have to throw the golf ball in to the sand as the velocity would not be constant, and this could not be controlled, as I would not be able to drop it with the same force each time. By just releasing the golf ball from my hand at the correct height would mean that the velocity of the golf ball in each tests would be the same. I think as I double the input, the output will also double, this is a quantitative prediction, so as I double the height I drop the golf ball from, the Gravitational potential energy (g.p.e), should also double. The force of impact is equal to the mass of an object multiplied by its acceleration. Different materials have different masses, which will affect the size of the crater. If the mass is increased, but the gravitational force and height above the sand stay the same, the gravitational potential energy will increase, and also the kinetic energy of the impact will increase too. ...read more.

On the Earth this is about 10N/Kg. The height must be vertical height for this formula to work. I will then increase the crater made and compare it with other heights, by doing this I predict that as the height increases so will the gravitational potential energy. By dropping the golf ball from the same angle but at a higher distance it will create a larger crater because the force of gravity makes the object increase its speed with time. The more I increase the height the more speed and velocity the object gains, meaning that the crater will be larger as I increase the height. The higher the drop height, the greater the velocity of the golf ball, so a larger crater will be made and the ejected sand will spread out farther. When the golf ball hits the sand some of the energy is transferred to heat energy, due to friction. Also during the impact, the kinetic energy is transferred to the surface, moving the particles sand around. When the object hits the sand Mark Woof ...read more.