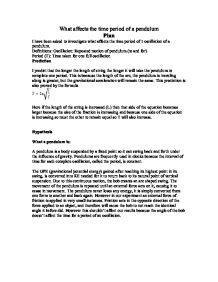 What affects the time period of a pendulum.

What affects the time period of a pendulum

I have been asked to investigate what affects the time period of 1 oscillation of a pendulum.

Definitions: Oscillation: Repeated motion of pendulum (to and for)
Period (T): Time taken for one full oscillation

I predict that the longer the length of string the longer it will take the pendulum to complete one period. This is because the length of the arc, the pendulum is traveling along is greater, but the gravitational acceleration will remain the same. This prediction is also proved by the formula

What a pendulum is:

A pendulum is a body suspended by a fixed point so it can swing back and forth under the influence of gravity. Pendulums are frequently used in clocks because the interval of time for each complete oscillation, called the period, is constant.

The GPE (gravitational potential energy) gained after reaching its highest point in its swing, is converted into KE needed for it to return back to its natural point of vertical suspension. Due to this continuous motion, the bob creates an arc shaped swing.

To make sure our results are accurate we need to keep everything but the variable constant. Below are some simple guidelines to ensure that our testing is fair.

Note: Although during my research I ascertained that the mass of the bob does not effect the period of the pendulum, I should still keep this constant, as I should only have one variable in my experiment.

Note: The friction on the string caused by the air will affect the results. Ideally, this experiment would be conducted in a vacuum. However, we have no equipment in school that we could use to achieve this.

However with the small bob with a short string it took 0.929 seconds compared to the long string which took 1.207 seconds. So obviously the length of the string affects the time. The smaller the string the bob is attached to the smaller the time it takes for a swing.

We also investigated whether the angle the ball is dropped from affects the time. With a big angle it took 12.85 secs so their was no big difference.

We will get 3 measurements and then average the results.

For each result we will let the pendulum swing for 10 periods and then average to eliminate human error as much as possible.

The angle will be same that we drop it from, also the weight of the bob will be the same. Were using a protractor to keep the angle the same.

We will put weights on the stand to make the results accurate.

We will not be going over 15 for the angle.