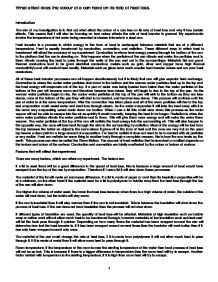 What effect does the colour of a can have on its rate of heat loss.

What effect does the colour of a can have on its rate of heat loss. Introduction The aim of my investigation is to find out what effect the colour of a can has on its rate of heat loss and why it has certain effects. This means that I will also be focusing on how colour affects the rate of heat transfer in general. My experiments involve the temperature of hot water being recorded at chosen intervals in a steel can. Heat transfer is a process in which energy in the form of heat is exchanged between materials that are at a different temperature. Heat is usually transferred by conduction, convection, and radiation. These different ways in which heat is transferred will affect the accuracy of my experiment. Conduction is where heat energy passes through the bottom of the can to the platform that the can is standing on. This happens when the particles of the can vibrate and make the particles next to them vibrate causing the heat to pass through the walls of the can and out to the surroundings. Materials that are good thermal conductors tend to be good electrical conductors; metals such as gold, silver and copper have high thermal conductivity's and will conduct heat readily. Materials such as glass have much smaller heat transfer values and are poor heat conductors. All of these heat transfer processes can all happen simultaneously but it is likely that one will give superior heat exchange. Convection is where the cooler water particles sink down to the bottom and the warmer water particles float up to the top and the heat energy will evaporate out of the top. ...read more.

* The material of the lids. * Where the thermometer is placed in the water. Prediction Out of the three colours that I chose to investigate I think that silver will be the best at reducing the heat loss. I am predicting this because I think that the main cause of heat loss will be radiation and we know that silver is a poor emitter compared to a plain beaker or a black one. This is why most saucepans are silver because silver is a poor emitter compared to white and black and also silver is shiny which cuts down heat wasted by radiation. I have predicted this because I have observed the Leslie cube experiment and the matt black side emits the most radiation By my prediction I also am suggesting that black will be the worst insulator, as it is a good emitter of radiation. I also think that with all three insulators the rate of heat loss will start of fast and over time will slow down. Apparatus I will need to gather the following apparatus before I can conduct my experiment: * Kettle * Safety goggles * Stop watch * Measuring cylinder * Thermometer * Three standard empty baked beans or food cans that are exactly the same in both capacity and size. All cans have to be painted a separate colour: Black, Silver and White using the same type of paint for each. * Three identical round corrugated card (cardboard) lids that are completely covered in foil and cover the cans entirely. Method Here is a simple explanation of what the experiment will involve: The procedure to carry out the experiment starts with boiling some ...read more.

I also subtracted the difference of each interval to enable me to draw my graph. Improvements to my experiment As an improvement to my experiment I could have put a corkboard underneath the copper can, as this will have reduced the conduction of heat from the copper can into the table. By doing all of these it would have kept my experiments much fairer. Further work If I were to do this experiment again I would improve it by having equal temperatures at the beginning of the experiment in each tin. If I were to do a different experiment on the same topic I would look at the different types of materials that the cans are made of to find out which is the best insulator of heat. I could also find out which material is the best insulator out of: cotton wool, cardboard, bubble wrap. There are several things that I could have done for further work. The first thing that I could do is to test different materials. By doing this I could see how well the insulation properties are between two materials such as cling film and cotton wool. I could also wrap the insulation round the copper can more times. This would show me if there is a greater increase in their insulation properties. I could also change the material of the can from copper to iron or aluminium to see if the material of the can affects the rate of which heat is transferred. If this experiment were repeated using the same apparatus apart from painting the inside of the can, then the results would be very different. This would give me a better outlook on which colour is the best and worst emitter of heat radiation. 1 ...read more.