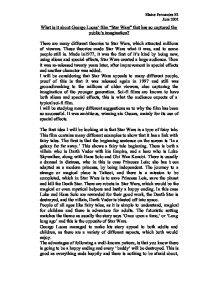 What is it about George Lucas' film

What is it about George Lucas’ film “Star Wars” that has so captured the public’s imagination?

There are many different theories to Star Wars, which attracted millions of viewers. These theories made Star Wars what it was, and to some people still is. Made in1977, it was the first of it’s kind by being new, using aliens and special effects, Star Wars created a large audience. Then it was re-released twenty years later, after improvement in special effects and another character was added.

I will be considering that Star Wars appeals to many different people, proof of this is that it was released again in 1997 and still was groundbreaking to the millions of older viewers, also capturing the imagination of the younger generation. Sci-fi films are known to have both aliens and special effects, this is what the audience expects of a typical sci-fi film.

I will be studying many different suggestions as to why the film has been so successful. It was ambitious, winning six Oscars, mainly for its use of special effects.

The first idea I will be looking at is that Star Wars is a type of fairy tale.

Star Wars contains religious elements which makes it very popular and appealing to people, so for my second theory I will be looking at Star Wars in religious terms.

In an interview George Lucas quoted: “I think it’s important to have a belief system and to have faith, I see Star Wars as taking all the issues that religion represents and that there is a great mystery out there.”

Obi Wan Kenobi believes in the Force and brings Luke to believe too. As if he was a priest, he convinces Luke that it is good to believe. A lot in the film depends on faith, for example when Luke is practising with his light saber, using his other senses apart from his eyes. Also at the end of the film when Luke has to destroy the Death Star, he can hear Obi Wan’s voice in his head saying, “Believe in the Force Luke.”

Darth Vader plays the part of the ‘devil’ as he is evil and wants to destroy. On the other hand if you look at Luke the hero and his partner Hans Solo, they do work good as a team but are very different as individuals.

Important features of Star Wars are the setting, and the battle scenes. George Lucas has used these for special effects purposes, by creating the battles at both beginning and end of the film, where the last was bigger and better then the first.

We know that George Lucas and the audience considered the use of special effects in the film Star Wars to be important and memorable. George Lucas spoke in one of his interviews about remaking the film and spending more money- but it was worth it!

Having studied a range of theories, I now think that Star Wars was so successful because of a combination of all four of these theories. Without one of them, I don’t think that it would have been as ground breaking to its viewers. Although there is a strong fairytale storyline and many special effects and aliens without the religious aspect of the ‘Force’ Star Wars wouldn’t be as appealing. This proves just how popular the film was both in the seventies up until today.