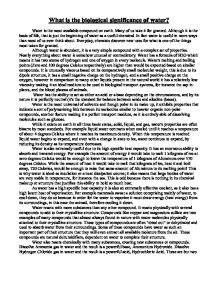 What is the biological significance of water?

What is the biological significance of water? Water is the most available compound on earth. Many of us take it for granted. Although it is the basis of life, that is just the beginning of water as a useful chemical. In fact water is useful in more ways than most of us ever think about. Everyday, chemists discover new uses for what is one of the things most taken for granted. Although water is abundant, it is a very simple compound with a complex set of properties. Nearly everything about water is somehow unusual or contradictory. Water has a formula of H2O which means it has two atoms of hydrogen and one of oxygen in every molecule. Water's melting and boiling points (Zero and 100 degrees Celsius respectively) are higher than would be expected based on similar compounds. It is unusually viscous based on its comparatively small molecular weight, this is due to its dipole structure, it has a small negative charge on the hydrogen, and a small positive charge on the oxygen, however in comparison to many other liquids present in the natural world it has ...read more.

This is why water is ideal as insulation or a heat dissipation source; it also means that large bodies of water are very stable in temperature, for instance the sea. This is odd because there is nothing in its chemical makeup or structure that justifies this ability to hold so much heat. As water has a high specific heat capacity it is also an extremely effective coolant, as it also has a high latent heat of vaporization. For example mammals sweat a solution comprising mainly of water, to cool down, they do so because in order for the water to vaporize it must draw energy (heat energy) from its surroundings, in this case the animal, therefore cooling it down. Water reacts with more substances than any other compound. It reacts physically with several compounds to add to their crystalline structure. Compounds like copper and magnesium sulfate are two examples of many compounds that almost always found in nature with water molecules physically attached to their crystalline structure. These types of compounds are often "dried out" or dehydrated and used to absorb water from their surroundings. ...read more.

It absorbs neutrons in nuclear power plants, yet is easily heated by microwaves. Water has excellent properties of cohesion, again due to its dipole nature, and the fact that the molecules or magnetically attracted to each other. An example of how this is used in the biological world is in the transpiration stream of plants, in witch the evaporation of water at the top of the plant (via the stomata) draws a column of water up the plant (in the xylem). Water still has some surprises left. Due to the existence of heavy hydrogen atoms of deuterium and trinium, water is the primary source of the raw materials needed for hydrogen bombs. Water also is the ideal source of hydrogen for the creation of Plasma, and the possible development of controlled fusion reactions. Water is a compound that we know so well yet know so little about. In its simple structure may be the key to understanding so much about the nature of chemical structures and reactions. A complete understanding of how and why the water molecule works may prove invaluable to our future development of new products and technologies. ...read more.