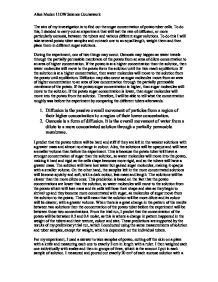 What is the concentration of sugar in potato cell?

This showed me what percentage of the original was left and so I was able to calculate the percentage difference. The median values are just the middle value of those provided when put into ascending order. If there were two values instead of three, I chose the lower value as the median instead of deciding to choose the middle value between them. Finally, to work out the range of the values, I subtracted the lowest value from the highest. I used each form of these in at least one of my graphs as well as lines of best fit for each data set I used, which helped me see the overall pattern in the data. To find out the gradient of the lines, I divided the difference between the value on the line at the first and last molar concentration and divided it by 5, which was the number of concentrations I used. The outliers in the graphs could usually be explained by outliers being excluded from the calculations to make them or could be the result of human error or faulty equipment. My first two graphs were on the percentage difference in the weight of the potato tubers after the experiment. I chose to do one from the group totals and the other from the averages for each molar because these would show the overall change that took place and was simpler than making the graphs from each individual measurement. I added on the lines of best fit and calculated the gradient of the graph, which in graph A showed that the higher the concentration of sugar, the greater the decrease in the weight of the potato tubers. ...read more.

My prediction was right as the potato was at the concentration I predicted and the effect of the solution on the potato was how I predicted, with the potato in the lower concentration becoming hard and white through water molecule intake, and the potato in the higher concentration becoming squishy, browning and small. My predictions about the effect on the solution were also right as the lower solutions became opaque and stringy through sugar molecules intake through diffusion and the higher solutions became clearer through the extraction of sugar molecules and the intake of water molecules. To make my experiment a fair test and reliable, I only changed the solution sugar concentration, as that was the factor being tested. However, as I ran out of potato, my results from this potato could jeopardise my overall findings. But, as I only used 3 or 4 samples form this potato, I have chosen to include them as a rough guideline to my conclusion. When I conducted the experiment, I used 3 samples of potato in each solution and repeated the experiment. This means that the results are fairly reliable as they are repeatable with the same pattern found each time. If I were to improve my experiment, I would use more accurate measurements so that I could make more specific conclusions. I would do this more specifically by using more samples of sugar solutions; preferably going form distilled water to 1 Molar up in 0.1 each time, so that I could have a more accurate conclusion as to the concentration of the potato. Also, I would use multiple samples of potatoes so I can tell the concentration of each in the beakers and repeat it a few more times to be completely certain about my findings. Alice Moden 11DW Science Coursework ...read more.