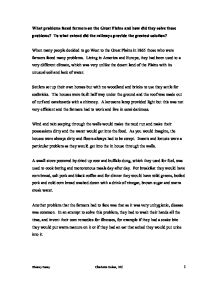 What problems faced farmers on the Great Plains and how did they solve these problems? To what extend did the railways provide the greatest solution?

What problems faced farmers on the Great Plains and how did they solve these problems? To what extend did the railways provide the greatest solution? When many people decided to go West to the Great Plains in 1865 those who were farmers faced many problems. Living in America and Europe, they had been used to a very different climate, which was very unlike the desert land of the Plains with its unusual soil and lack of water. Settlers set up their own homes but with no woodland and bricks to use they settle for sodbricks. The houses were built half way under the ground and the roof was made out of turf and eaveboards with a chimney. A kerosene lamp provided light but this was not very efficient and the farmers had to work and live in semi darkness. Wind and rain seeping through the walls would make the mud run and make their possessions dirty and the water would get into the food. As you would imagine, the houses were always dirty and floors always had to be swept. ...read more.

Living on desert land it was difficult to grown crops because of the dry soil and a different climate to what the farmers were used to. They used trial and error methods to grow crops such as maize and wheat but this took a long time. Hot summers and cold winters did not help this situation as they needed more water. Ploughing and sowing was also a problem for the farmers as the Plains had never been ploughed before and the grass roots were at least 10 cms thick and very dense. Whilst trying to plough the cast iron ploughs broke under the strain. This was a slow and back breaking job for the men. Eventually they started to use mechanical equipment such as reapers, binders and threshers which became inexpensive due to mass production. Another problem the climate brought on the Great Plains there was not enough rainfall in the year and when it did rain it was in the summer and which would dry it up very quickly. ...read more.

Grass hoppers and locust were all around and they would eat through everything in their sight. If the settlers were to survive they would have to find new ways of farming. The began to use chemicals to kill the locust and grasshoppers. One of the best solutions to the farmer's problems was the railroads which provided them with many things. The railways allowed better and faster communications and quick and easy trade with the East. The railroads encouraged the spread of cattle onto the Plains. Settlers now had access to raw materials as the railroads would allow them to bring across things such as wood, food, seeds and machinery. As I have said in this essay the farmers faced many problems when they moved to the Great Plains but they managed to find some sort of solution for most of these. I would suggest that the railroads were probably one of the best solutions to their problems. This is because before the railroads came along life on the Plains was very difficult and they did not have easy access to the things that would make their life easier. History Essay Charlotte Dukes, 10C 1 ...read more.