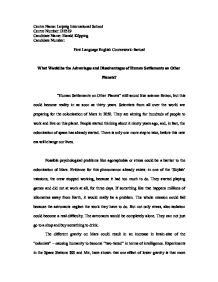 What Would be the Advantages and Disadvantages of Human Settlements on Other Planets?

What Would be the Advantages and Disadvantages of Human Settlements on Other Planets?

“Human Settlements on Other Planets” still sound like science fiction, but this could become reality in as soon as thirty years. Scientists from all over the world are preparing for the colonisation of Mars in 2050. They are aiming for hundreds of people to work and live on this planet. People started thinking about it ninety years ago, and, in fact, the colonisation of space has already started. There is only one more step to take, before this new era will change our lives.

Possible psychological problems like agoraphobia or stress could be a barrier to the colonisation of Mars. Evidence for this phenomenon already exists: in one of the ‘Skylab’ missions, the crew stopped working, because it had too much to do. They started playing games and did not at work at all, for three days.

There are many opponents of settlements on other planets, because of the huge cost of the project. One journey to Mars would cost about 200 Billion Euros. Why should we spend that much money for the colonisation of the rusty particle of dust in space? There are much more important problems on our planet and the lower gravity could split the human race. We would only create new problems. But it seems as if the adversaries forget that the USA spend every year 330 Billion Euros (2002) in the military. That is more than enough for one Mars Mission.

The colonisation of other planets could unite mankind because it would have a common aim. If the colonisation of Mars would really start, the whole humanity would be in an euphoric atmosphere. People would understand that all human beings are equal. People would understand that we are one mankind. Wars could end. The leaders of the world’s countries could shake their hand. National differences would loose their importance. The economic force of the earth’s countries would increase and everybody would know the he is a citizen of the world. Nobody knows whether this will really happen. However, it is possible.

For this purpose, the mankind is able to colonise Mars. It should do it. It is the only way to ensure the next generations a great future. There is no argument against the project that could really keep us from settling on other planets. People will fall in, and get their children on Mars. They will laugh about the sentence “’Settlements on other planets’ still sound like science fiction”. The next evolutionary step would be done.