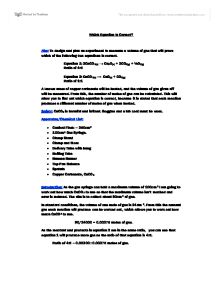 Which Equation Is Correct?

Which Equation Is Correct? Aim: To design and plan an experiment to measure a volume of gas that will prove which of the following two equations is correct. Equation 1: 2CuCO3(s) � Cu2O(s) + 2CO2(g) + 1/2O2(g) Ratio of 4:5 Equation 2: CuCO3(s) � CuO(s) + CO2(g) Ratio of 1:1 A known mass of copper carbonate will be heated, and the volume of gas given off will be measured. From this, the number of moles of gas can be calculated. This will allow you to find out which equation is correct, because it is stated that each reaction produces a different number of moles of gas when heated. ...read more.