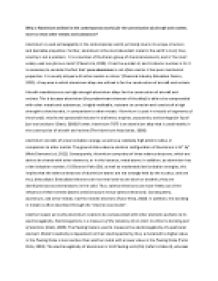 Why is Aluminium utilised in the contemporary world, for the construction of aircraft and rockets, more so than other metals and substances?

﻿Why is Aluminium utilised in the contemporary world, for the construction of aircraft and rockets, more so than other metals and substances? Aluminium is used extravagantly in the contemporary world, primarily due to its unique structure and desirable properties. Further, aluminium is the most abundant metal in the earth?s crust; thus, scarcity is not a problem. It is a member of the Boron group of chemical elements, and is ?the most widely used non-ferrous metal? (Planet Ark, 2010). It has the symbol Al, and its atomic number is 13. It is necessary to consider the fact that ?pure aluminium is not often used as it has poor mechanical properties. It is usually alloyed with other metals or silicon? (Chemical Industry Education Centre, 2011). A key area in which aluminium alloys are utilised is for the construction of aircraft and rockets. Aircraft manufacturers use high-strength aluminium alloys for the construction of aircraft and rockets. This is because aluminium (the predominant element of the alloy) ...read more.

The Pauling Scale is used to measure the electronegativity of a particular element. Metal's reactivity is dependent on their electropositivity; thus, a metal with a higher value in the Pauling Scale is less reactive than another metal with a lower value in the Pauling Scale (Tutor Vista, 2010). The electronegativity of aluminium is 1.61 Pauling units (Pu) (refer to table 3), whereas the electronegativity of copper is 1.65 Pu and iron, 1.83 Pu (refer to table 3). Thus, aluminium is more reactive than copper and steel, and is able to be adeptly bonded with other elements. (Other factors are involved) Malleability is the ability of a metal to exhibit large deformation or plastic response when being subjected to compressive force (Engineers Edge, 2012). The key reason as to why Aluminium is highly malleable pertains to its polycrystalline structure. The polycrystalline structure of aluminium consists of various dislocations, or crystallographic defects. The presence and movement of these dislocations, gives rise to characteristic and desirable metallic properties, for instance, malleability (Davyson). ...read more.

Iron, on the other hand, has an atomic mass of 58.845 AMU and an atomic radius of 172pm. Aluminium consists of a face-centred cubic (fcc) crystal structure, whereas iron has a body-centred cubic structure. The atomic packing factor (APF) of a face-centred cubic crystal structure is 0.74, whilst the APF of a body-centred cubic crystal structure is 0.68. Although aluminium comprises of a more compact atomic structure, the fact that Aluminium has a higher atomic radius, as well as lower atomic mass, in comparison to that of iron; thus, having less mass in a certain space than iron, allows it to have a lower density. This pertains to the fact that density is equal to mass over volume (d=m/v). Aluminium is used extravagantly in the contemporary world, primarily due to its unique structure and desirable properties. A Key area in which aluminium is utilised is for the construction of aircraft and rockets. The reasons, as to why aluminium is used in this particular application, are apparent and abundant. ...read more.

This essay has excellent features: a lot of material has been referenced and sourced correctly, and a good understanding of key chemical principles has been illustrated.

However, at points the essay does not link to the question at hand. A discussion of the alloys of aluminium and their chemical composition is missing, as well as a general definition of what an alloy is and how it has different properties to the parent metal. The conclusion is also lacking an evaluation.