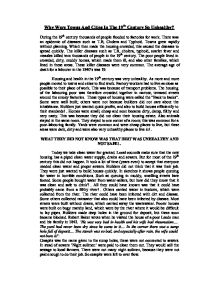 Why Were Towns And Cities In The 19th Century So Unhealthy?

Why Were Towns And Cities In The 19th Century So Unhealthy? During the 19th century thousands of people flooded to factories for work. There was an epidemic of diseases such as T.B, Cholera and Typhoid. Towns grew rapidly without planning. Which then made the housing crowded, this caused the diseases to spread quickly. The killer diseases such as T.B, cholera, typhoid, scarlet fever and measles killed tens thousands of people in the 19th century. The poor people lived in crowded, dirty, muddy homes, which made them ill, and also other families, which lived in these areas. These killer diseases were very common. The average age of death for a labourer in the 1840's was 19. Housing and health in the 19th century was very unhealthy. As more and more people moved to towns and cities to find work. Factory workers had to live as close as possible to their place of work. This was because of transport problems. The housing of the labouring poor was therefore crowded together in narrow, terraced streets around the smoky factories. ...read more.

Builders did not think that it was their job. They were just wanted to build houses quickly. In sketches it shows people queuing for water in horrible conditions. Such as queuing in muddy, smelling streets bare footed. Some people bought water from water-sellers, but how did they know that it was clean and safe to drink? . All they could have known was that it could have probably came from a filthy river! . Others carried water in buckets, which were collected from the river. The river could have been infected with dirt and disease. Some others collected rainwater that also could have been infected by disease. Most streets were built without drains, which carried away the wastewater. Poorer houses were built on bogy marshy land, which were by the river where it would be difficult to lay pipes. Builders made deep holes in the ground for deposit, but these soon became blocked. Robert Baker wrote when he visited the house of a poor Leeds man and his family in 1842. ...read more.

Even if doctors showed a connection between dirty drinking water and cholera, councils were slow to take any action. To take any action to provide the labouring poor with clean water costed money. But many middle class ratepayers did not want to see their money spent on the welfare and well being of the poor! . My conclusion is that housing, water and health was very bad and very unhygienic, even though doctors knew that there were connections between dirty water and cholera. Councils were just too slow to take any action; this caused the cholera to spread even faster! . Providing the poor with clean water I think would have costed a lot of money, which then the councils had to raise up. If the cesspits were cleaned more frequently, I think that would have made a big difference in the spreading of the cholera epidemic, and also if the water supply was clean and disinfected. I think also that cholera would spread quickly in the streets because they were crowded and because a group of families used the same water supply, which might be infected. Or because they might be eating infected foods. Fabina Nazmin Hussain 9.E ...read more.