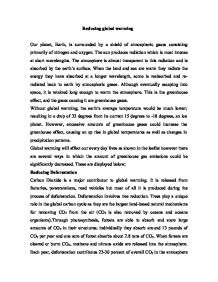 Would Using alternative sources or energy dramatically reduce the need to burn fossil fuels and risk of global warming?

Our planet, Earth, is surrounded by a shield of atmospheric gases consisting primarily of nitrogen and oxygen. The sun produces radiation which is most intense at short wavelengths. The atmosphere is almost transparent to this radiation and is absorbed by the earth’s surface. When the land and sea are warm they radiate the energy they have absorbed at a longer wavelength, some is reabsorbed and re-radiated back to earth by atmospheric gases. Although eventually escaping into space, it is retained long enough to warm the atmosphere. This is the greenhouse effect, and the gases causing it are greenhouse gases.

Without global warming, the earth’s average temperature would be much lower; resulting in a drop of 33 degrees from its current 15 degrees to -18 degrees, an ice planet. However, excessive amounts of greenhouse gases could increase the greenhouse effect, causing an up rise in global temperatures as well as changes in precipitation patterns.

Global warming will affect our every day lives as shown in the leaflet however there are several ways in which the amount of greenhouse gas emissions could be significantly decreased. These are displayed below;

Carbon Dioxide is a major contributor to global warming. It is released from factories, powerstations, road vehicles but most of all it is produced during the process of deforestation. Deforestation involves tree reduction. Trees play a unique role in the global carbon cycle as they are the largest land-based natural mechanisms for removing CO2 from the air (CO2

Fossil fuels are a reliable source of energy however they cause damage to the atmosphere and will be exhausted in the future. The alternative source of energy is renewable energy and is produced in many ways using the sun, wind, tide and waves.

The first form of renewable energy that we use is Solar Power. There are three main ways that we use our suns energy;

Solar Cells contain light sensitive cells that convert light directly into electricity. In a sunny climate you can get enough power to run a 100w light bulb from just one square meter of a solar panel.

Solar Water heating, heats water in a glass panel on your roof. Water is pumped through pipes in the panel. They are painted black therefore absorb sunlight and heat up. This aids the central heating system and reduces fuel bills.

Solar furnaces use a huge array of mirrors to concentrate the suns energy into a small area and produce very high temperatures.

An advantage to solar energy is that it is cleaner for the environment than the emissions produced as a by-product from fossil fuels. Because solar energy uses the sun, it doesn’t produce waste or pollutes the air and it’s free. In sunny countries solar power can be used where there is no convenient access to electricity in a remote area.

A disadvantage to solar energy is that it only operates in sunny conditions therefore it doesn’t work at night.

The advantage of this solution is it is more reliable than wind, solar or wave power as electricity can be generated constantly. No waste of pollution is produced and energy is virtually free. However the dam itself is very expensive to build. Therefore it is also used for flood control or irrigation so building costs can be shared. The dam will flood a very large area upstream, causing problems for animals that to live there. Furthermore water quality and quantity downstream can be affected, which can have an impact on plant life.

This shows that there are many different types of alternative sources of energy that can be used to decrease the amount of fossil fuels burnt. Although some methods are expensive at first in the long run they will benefit owners as the electricity produced is free. Each method effectively produces electricity without releasing any greenhouse gases or waste. If these methods are used there will be no need to burn fossil fuels and therefore decreases the amount of greenhouse gases in the atmosphere.

In conclusion I believe that using alternative sources or energy would dramatically reduce the need to burn fossil fuels and risk of global warming will diminish. Although reducing deforestation will effectively reduce the amount of greenhouse gases in our atmosphere I think it will be easier to use alternative sources of energy as they are renewable and it will secure our younger generations future. There are many different methods of this solution and if used simultaneously there will be enough electricity produced to reduce the amount of fossil fuels used and therefore reduces the risk of global warming.