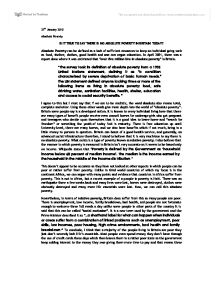 Absolute Poverty in the United Kingdom

IS IT TRUE TO SAY THERE IS NO ABSOLUTE POVERTY IN BRITAIN TODAY? Absolute Poverty can be defined as a lack of sufficient resources to keep an individual going such as food, shelter, clothes, good health and one can argue education. In April 2001, there was a report done where it was estimated that "over five million live in absolute poverty" in Britain. "The survey took its definition of absolute poverty from a 1995 United Nations statement, defining it as "a condition characterised by severe deprivation of basic human needs." The UN statement defined anyone lacking three or more of the following items as living in absolute poverty: food, safe drinking water, sanitation facilities, health, shelter, education and access to social security benefits." ...read more.

Britain can boast of a good health service, and generally, an advanced social infrastructure therefore, I stand to believe that it is very much true to say there is no absolute poverty. What exists is a type of poverty known as relative poverty. I also believe that the manner in which poverty is measured in Britain isn't very accurate as it seems to be based only on income. Wikipedia states that "Poverty is defined by the Government as 'household income below 60 percent of median income'. The median is the income earned by the household in the middle of the income distribution." This doesn't appear to be accurate as they have not looked at other aspects in which people can be poor or rather suffer from poverty. ...read more.

It is a new term used by the government and the Prime Minister described it as "...a shorthand label for what can happen when individuals or areas suffer from a combination of linked problems such as unemployment, poor skills, low incomes, poor housing, high crime environments, bad health and family breakdown." To conclude, I think that a majority of the people living in Britain are poor they just don't severely lack life's essentials. Most people even spend money they don't have through the use of credit cards these days which then leaves them in a rather poor state as the government keep adding interest to the money they owe giving them more time to pay and that means these people have unknowingly signed up for a life in debt. But overall, it is true to say Britain has no absolute poverty whatsoever. ?? ?? ?? ?? 27th January 2010 Absolute Poverty ...read more.