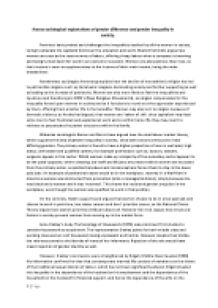 ﻿Assess sociological explanations of gender difference and gender inequality in society. Feminists have probed and challenged the inequalities tackled by all the women in society, trying to alleviate the capitalist hold over the education and work. Marxist feminists argue how women are seen as the reserve army of labour, offering cheap labour when a company is booming and being turned down for work in an economic recession. Women are also paid less than men, as their income is seen as supplementary to the income of their main income, being the male breadwinner. Nonetheless sociologist Armstrong explains how the decline of monotheistic religion has led to patriarchal religions such as; Abrahamic religions dominating society and further supporting as well as leading to the increase of patriarchy. ...read more.

The primary sector is found to have a higher proportion of men in well paid, high status, well stable and qualified careers; for example professions such as, doctors, lawyers, surgeons appear in this sector. Whilst women make up a majority of the secondary sector appears to be the polar opposite, where cleaning, bar staff and McJobs are present within women are excluded from the primary sector, as patriarchal values and misconceptions forces them to stay in the lower paid jobs. An example of patriarchal values would be in the workplace, recently in a Wal-Mart in America a woman was obstructed from promotion (onto a managerial status), simply because she was black and a woman and it was ?reserved?. ...read more.

However despite their dislike, the role was central to the identity of many of her informants. Rejection of the role would have meant rejection of gender identity as well. However, Oakley's conclusions were strengthened by Edgell, Middle Class Couples (1980). His information confirms the view that contemporary married life consists of variations on the theme of the traditional sexual division of labour, which has not been significantly altered. Edgell situated this inequality in the dependence of the husband on his employment and the dependence of the household on the husband for financial support, and hence the dependence of the wife on the husband. Gender inequality in society ultimately shows how capitalism supports men, as the Triple System Theory; where racism, capitalism and patriarchy ensure and equate to society which clearly functions for the interests and purposes of a white middle class male minority. | Page ...read more.