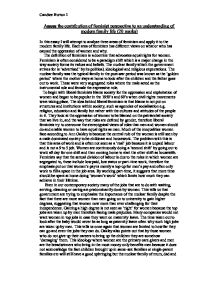 Assess the contribution of feminist perspective to an understanding of modern family life (20 marks) In this essay I will attempt to analyse three areas of feminism and apply it to the modern family life. Each area of feminism has different views on what or who has caused the oppression of women and why. The definition of feminism is a doctrine that advocates equal rights for women. Feminism is often considered to be a paradigm shift which is a major change in the way society forms its values and beliefs. The nuclear family which the government strives for is 'advertised' by its political, ideological and religious expectations. The nuclear family was the typical family in the post-war period was known as the 'golden period' where the mother stays at home to look after the children and the father goes out to work. These were very segregated roles where the male acted as the instrumental role and female the expressive role. To begin with liberal feminists blame society for the oppression and exploitation of women and began to be popular in the 1950's and 60's when civil rights movements were taking place. The idea behind liberal feminism is that blame is not put on structures and institutions within society, such as agencies of socialisation e.g. religion, education and family but rather with the cultures and attitudes of the people in it. ...read more.

They believe that the nuclear family is supported because by women staying at home doing housework and caring for the children, she will have time to attend to her husbands needs therefore keeping him in good order to go back out to work the next day. Marxist feminists believe that it is not the patriarchal society that we live in that causes the oppression of women as liberal feminists had understood but the social class that we live in that was the problem. They also say that it is capitalism that subordinates women however the theory does not account for why women are subordinated in non-capitalist societies. Marxists feminists were more interested of oppression of women in the workplace rather than the home and became angry at the unequal pay despite men and women performing the same roles. With this in mind it suggests that women are pushed out of work and into the home because of the unequal pay which returns them to the norm of the nuclear family. However Barrett and McIntosh believe that the idea of the nuclear family is misleading because what is a normal or typical family? It may be impossible to claim that the family performs particular functions simple because of the family structure. Recent events that show that the government is trying to support the idea of equal pay is in sport. ...read more.

Is this because couples nowadays like the 'no strings attached' approach and prefer cohabitation or just men and women are still struggling for power within the marriage? There is no need for women to stay at home all day unless they wish to, as well as being practically able to do any job a man can. The feminist perspective has been criticised by other theories such as functionalism for their some of their outspoken ways. Many have said that by preaching hate about men for the oppression of women, it is practically the same as r****m and therefore rejected by many feminists themselves. As well as this by pushing women into work we may be neglecting the children. If both parents are working full-time there may be less time for the children, parents may not be able to attend parents evening and ultimately leading to bad behaviour in children to get noticed. The feminist view gives us a great amount of research in to the power and control that women have and the way the government and society still sees women's role as housewife and care giver. Is it time for women to stand up and be heard or to go back to the traditional roles that we are assigned to? Ours views on feminism differ depending on our social class, race, religion and era yet our challenge to be treated equal is still evident. ?? ?? ?? ?? Candice Burton 1 ...read more.

This essay shows that the candidate has sound knowledge of the many different strands of feminism. The essay begins with a bold statement, Ã¢â‚¬Å“In this essay I will attempt to analyse three areas of feminism and apply it to the ...

This essay shows that the candidate has sound knowledge of the many different strands of feminism. The essay begins with a bold statement, Ã¢â‚¬Å“In this essay I will attempt to analyse three areas of feminism and apply it to the modern family life. Each area of feminism has different views on what or who has caused the oppression of women and whyÃ¢â‚¬Â which shows that they will indeed answer the specific question set. It then proceeds to define feminism as a whole which is useful. The candidate explains the three types of feminism in a list fashion, before diving deep into their evaluations, which actually works well, even though it is not the traditional format GCSE candidates are usually taught (Point, Example, Evaluation).

Feminist terminology is used, Ã¢â‚¬Å“oppressionÃ¢â‚¬Â and Ã¢â‚¬Å“exploitationÃ¢â‚¬Â and the writer also refers to the Civil Rights Movement which shows that they have good historical knowledge of other events happening at the same time as the Feminist movement. They also mention particular sociologists, such as Firestone which is excellent. They also refer to the Ã¢â‚¬Å“modernÃ¢â‚¬Â issue of the question by providing useful contemporary examples of the elements of modern family life.
The essay fails to answer the Ã¢â‚¬Å“assessÃ¢â‚¬Â element of the question somewhat. Although it thoroughly considers a great multitude of feminist contributions to our understanding of modern family life (liberal, Marxist, radical) the writer needs to consider what, for instance, Marxists say in contrast to feminists, in order to gain more evaluative points. For example they could state: Ã¢â‚¬Å“Feminist perspectives are more useful to our understanding, than traditional sociological theories such as Marxism, because feminists are studying society now whereas Marxists fail to account for the massive social change that has happened since Marx was writingÃ¢â‚¬Â.
The writer needs to be careful in confusing traditional Marxist theory with that of Marxist Feminism. For example: Ã¢â‚¬Å“Marxists believe that women are often the ones who form negative concepts of themselvesÃ¢â‚¬Â is incorrect, as that is a Marxist feminist belief. It would be useful if the candidate could mention that the key terms they are using are from a Functionalist origin, Ã¢â‚¬Å“instrumental role and female the expressive roleÃ¢â‚¬Â. This would just showcase that the writer has sociological knowledge from a range of perspectives.

This essay doesnÃ¢â‚¬â„¢t include any spelling or grammatical errors. I do like the use of including rhetorical questions, Ã¢â‚¬Å“what is a normal or typical family?Ã¢â‚¬Â as it allows the examiner to see that the candidate is insightful, whilst providing elements of evaluation.