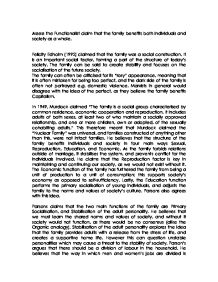 Assess the Functionalist claim that the family benefits both individuals and society as a whole. Felicity Edholm (1992) claimed that the family was a social construction. It is an important social factor, forming a part of the structure of today's society. The family can be said to create stability and focuses on the socialisation of the future society. The family can often be criticised for its "rosy" appearance, meaning that it is often mistaken for being too perfect, and the dark side of the family is often not portrayed e.g. domestic violence. Marxists in general would disagree with the idea of the perfect, as they believe the family benefits Capitalism. In 1949, Murdock claimed "The family is a social group characterised by common residence, economic cooperation and reproduction. It includes adults of both sexes, at least two of who maintain a socially approved relationship, and one or more children, own or adopted, of the s******y cohabiting adults." This therefore meant that Murdock claimed the "Nuclear Family" was universal, and families constructed of anything other than this, were not infact families. He believes that the structure of the family benefits individuals and society in four main ways s****l, Reproduction, Education, and Economic. ...read more.

This idea claims that the Nuclear is under threat due to a breakdown in traditional values, over generous welfare to single mothers, feminism increase, and greater tolerance of gay and lesbian relationships. This they believe prevents the family from socialising its members well, an increase in underachievement occurs, and behaviour deteriorates of young members of society. Being "Married to the state" is one of the New Right's ideas about lone mother families, saying that they become dependent on the state for benefits and housing, whilst leaving their children to their own device. Dennis and Erdos (2000) claimed that "Families without fathers" increased the likelihood of boys growing up without expecting to be responsible for a family, therefore becoming anti-social and irresponsible. Another researcher, Charles Murray, argued that boys who grow up in single parent families lack role models, and are less likely to accept having to be responsible for work or parenthood, increasing the amounts of crime. This raises questions and can criticise the family itself. Criticisms of the family include that the family is seen "through rose tinted glasses" meaning that it provides an image that is too perfect, and does not show the dark side of it, e.g. ...read more.

According to Fran Ainsley, women are the "takers of s**t", and believes that male workers, who are subject to Capitalism, take it out on their wives. Radical Feminists take a stronger view, and say that in the family, men dominate women through violence, causing their oppression, however it can be said that child abuse still exists in lesbian families. Lastly, Black Feminists are for the Family structure, as they think it is a positive source of support against r****m, however white feminists often ignore black women's experiences of racial oppression. When describing a "family" it is often hard to differentiate between the supposed ideal "nuclear" family, and those families more evident of modern society. Functionalists define the family as being "Nuclear" and believe this structure is universal. Functionalists like Murdock and Parsons agree that the family benefits individuals through the four functions s****l, Reproduction, Education, and Economic, and by learning primary socialisation through norms and values. Parsons also claims that the stabilisation of the adult personality is also not just key for individuals but makes society stable. Once an individual member of a family is socialised primarily, it prepares them for the secondary stages of socialisation in a modern society. ?? ?? ?? ?? ...read more.

This question has been answered extremely well for a GCSE candidate. The writer has a sound understanding of Functionalism, which is evident as the essay refers to key Functionalist sociologists, explaining their theories in great detail (Parsons, Murdock). As well ...

This question has been answered extremely well for a GCSE candidate. The writer has a sound understanding of Functionalism, which is evident as the essay refers to key Functionalist sociologists, explaining their theories in great detail (Parsons, Murdock). As well as using external criticisms from other groups within sociology (such as the different realms within feminism - radical, liberal), the writer provides some internal evaluation. For example, by simply stating, Ã¢â‚¬Å“Parsons also agrees with this ideaÃ¢â‚¬Â, shows that the writer can reflect on similarities between Functionalist sociologists. It demonstrates that they understand the main sociological theory that the question is addressing. However, the conclusion, although detailed in terms of Functionalism, lacks summative statements regarding opposing theories. Most candidates do tend to forget to address its critiques in this crucial section of the essay, but by referring to more theories in the conclusion than the question asks for, really would set this candidate apart from the rest of their peer group.

The writer explains sociological theory in detail, and includes a range of sociologists, which shows the great extent of their knowledge. The writer also provides strengths of the Functionalist claim (for example by referring to the New Right) rather than just its weaknesses, which most candidates tend to forget to include. Marxism and feminism are also well explained as a Functionalist critique, which is impressive at GCSE level. Functionalist and Marxist key terms are used particularly well in context, Ã¢â‚¬Å“capitalistÃ¢â‚¬Â and Ã¢â‚¬Å“organic analogyÃ¢â‚¬Â, as well as Functionalist key concepts such as Ã¢â‚¬Å“the stabilisation of adult personalitiesÃ¢â‚¬Â. This clearly shows that they have an impressive knowledge of sociology as a whole. The only key term which I felt could be mentioned is the radical/Marxist feminist concept of patriarchy (as the family is patriarchal). However this is still a brilliant essay for GCSE, and this minor issue would not diminish the overall grade awarded to this academically sound essay. The use of the term would just improve the essay to an even higher standard.

There are random uses of capital letters for certain words in this essay, such as Ã¢â‚¬Å“CapitalismÃ¢â‚¬Â and Ã¢â‚¬Å“StabilisationÃ¢â‚¬Â which is inaccurate. I think the writer just feels that these terms are crucially important to the essay, and so feels the need to differentiate them somehow. However this importance could be best portrayed by using quotation marks where appropriate instead.
A few minor grammatical issues could be rectified by adding an extra word, for example, Ã¢â‚¬Å“Marxists in general would disagree with the idea of the perfect, as they believe the family benefits CapitalismÃ¢â‚¬Â, would make more sense if the writer had proceeded to write the word Ã¢â‚¬Å“familyÃ¢â‚¬Â after writing Ã¢â‚¬Å“perfectÃ¢â‚¬Â. On the whole spelling, punctuation and grammar are very good, especially for a GCSE candidate.