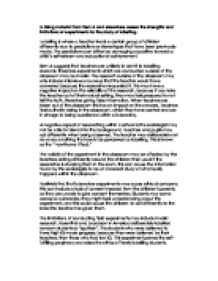 Assess the strengths and limitations of experiments for the study of labelling.

5. Using material from item A and elsewhere assess the strengths and limitations of experiments for the study of labelling. Labelling is where a teacher treats a certain group of children differently due to predictions or stereotypes that have been previously made. The predictions can either be damaging or positive towards a child's self-esteem and educational achievement. Item A suggests that teachers are unlikely to admit to labelling students; therefore experiments which are conducted outside of the classroom may be invalid. The research outside of the classroom may only include interviews or surveys that the teacher would have answered because the researcher requested it. This may have a negative impact on the reliability of the research, because if you take the teacher out of their natural setting, they may feel pressured to not tell the truth, therefore giving false information. When teachers are taken out of the classroom this has an impact on the answers. Teachers feel authority being in the classroom, which they have control and are in charge to being questioned within a laboratory. A negative aspect of researching within a school is the sociologist may not be able to blend into the background. Teachers and pupils may act differently when being observed. The teacher may deliberately not do or say anything that could be perceived as labelling. This is known as the "Hawthorne Effect." ...read more.

It is best known for analysing the documents produced by mass media, such as television news bulletins or advertisements. Content analysis enables sociologists to produce quantitative data from these sources. 7. Suggest two examples of personal documents Personal documents include items such as letters, diaries and photographs. The importance is this is an individual's perspective of accounts of the social events and personal experiences, and they include the individual's feelings and attitudes. 8. Identify two problems of using documents in sociological research Problems which can affect documents in sociological research consist of informed consent and confidentiality. Participants should be offered the right to refuse being studied. The researcher would have to tell the participant the relevant aspects of the research, so they can make a fully informed decision. The consent should be obtained before the research begins. When being studied the researchers should keep their participants secret in order to prevent possible negative effects on them. 9. Examine the reasons why some sociologists choose to use official statistics when conducting research. Official statistics are a source of secondary data which is gathered by the government. There are numerous reasons to use official statistics, the main reasons is they are a form of secondary data; which means they are not collected by the researcher themselves. The research is large scale therefore it is high in representativeness and reliability. ...read more.

Durkheim tested his prediction comparing suicide rates of the religious groups, who were similar in other aspects, for instance where they lived and their marital status. The hypothesis was supported by the official statistics on suicide, which showed Catholics had lower suicide rates. Therefore Durkheim prediction was correct. However sociologist such as interpretivits criticise official statistics when conducting research. An interpretivist such as Atkinson regards official statistics as lacking validity. Statistics are not real or "social facts", they are socially constructed that represents labels given by others. Statistics do not demonstrate the true rate of suicides that have taken place, but the total number of decisions made by coroners to label particular deaths as suicides. Rather then acknowledging statistics as they are shown, interpretivits argue that we should investigate how statistics are socially constructed by observing how the coroner comes to their decision, to label some deaths as suicides whereas others are labelled as accidents. This then would show some validity in their research. Ultimately researchers would possibly choose official statistics when conducting research, because there are more positive aspects to collect statistics then negative. Official statistics are easy to use meaning they have a high level of practically for sociologist, which can conduct their research without worrying about time, money or resources. Also because the statistics is already collected consent does not have to be given. Statistics being nationwide means that sociologist can conduct a representative study. Also because sociologists are trained at producing data it means the statistics are reliable because they can be easily repeated. Validity is the only concern for interpretivists. ...read more.