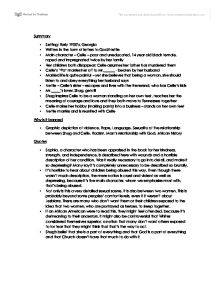 Summary � Setting: Early 1900's, Georgia � Written in the form of letters to God/Nettie � Main character - Celie - poor and uneducated, 14 year old black female, raped and impregnated twice by her family � Her children both disappear; Celie assumes her father has murdered them � Celie's "Pa" marries her off to Mr.______ - beaten by her husband � Married life is quite painful - yet she believes that being a woman, she should listen to and obey everything her husband says � Nettie - Celie's sister - escapes and lives with the Reverend, who has Celie's kids � Mr._____'s lover, Shug, gets ill � Shug inspires Celie to be a woman standing on her own feet, teaches her the meaning of courage and love and they both move to Tennessee together � Celie makes her hobby (making pants) ...read more.

� Not only is this a very detailed s****l scene, it is also between two women. This is probably beyond some peoples' comfort levels, even if it weren't about Lesbians. There are many who don't want them or their children exposed to the idea that two women, who are portrayed as heroes, to sleep together. � If an African American were to read this, they might feel offended, because it's demeaning to their ancestors. It might also be controversial that Whites considered themselves superior, a notion that many don't want others exposed to for fear that they might think that that's the way to act. � Shug's belief that she is a part of everything and that God is a part of everything and that Church doesn't have that much to do with it Some believe that proof is ...read more.

Men and women who are looking for controversy will find it- but if they believe this book is pointless and obscene, then they have missed the beauty of the novel. It has already been stated that Alice Walker was a feminist and active in the civil rights movement, fighting against r****m, which later on became one of the reasons her masterpiece was banned. The Color Purple tells us the injustices of an older America, while at the same time, spinning a story of individual people who endured them. It was as though they were on a ship at sea, having to steer through the many storms to enjoy a few moments of warm sunshine. In my opinion, anyone mature enough to handle this book should read it, and it should be available to them through schools and libraries. ...read more.