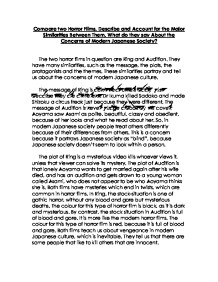 Compare two Horror Films. Describe and Account for the Major Similarities Between Them. What do they say About the Concerns of Modern Japanese Society?

Compare two Horror Films. Describe and Account for the Major Similarities Between Them. What do they say About the Concerns of Modern Japanese Society? The two horror films in question are Ring and Audition. They have many similarities, such as the message, the plots, the protagonists and the themes. These similarities portray and tell us about the concerns of modern Japanese culture. The message of Ring is don't treat others badly just because they are different. Dr Ikuma killed Sadako and made Shizoku a circus freak just because they were different. The message of Audition is never judge a book by its cover. Aoyama saw Asami as polite, beautiful, classy and obedient, because of her looks and what he read about her. So, in modern Japanese society people treat others differently because of their differences from others. This is a concern because it portrays Japanese society as "blind", because Japanese society doesn't seem to look within a person. The plot of Ring is a mysterious video kills whoever views it, unless that viewer can solve its mystery. ...read more.

However, he does not neglect his son, but becomes closer to him after the death of his wife. He feels lonely and depressed though, as he misses his wife, and had a perfect family. As a result he holds an audition for possible future wife. Both films have major similarities as Asakawa and Aoyama are victims of dysfunctional families and crave for perfect ones. This shows that some families in modern Japanese society are dysfunctional and are in search for a perfect family. The concerns of this are that those families don't usually become perfect, and sometimes become even more dysfunctional. However, some families do become perfect, so this is one concern that can be fixed. In Ring, the villainess is Sadako. She is mentally ill and supernatural, since she can kill people using her mind. She kills people out of vengeance because of the grief she endures as her mother was treated like a circus freak (whom is also supernatural, because she can predict the future). ...read more.