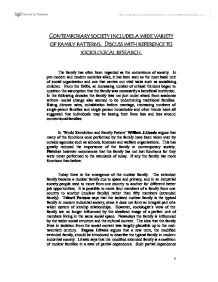 CONTEMPORARY SOCIETY INCLUDES A WIDE VARIETY OF FAMILY PATTERNS. DISCUSS WITH REFERENCE TO SOCIOLOGICAL RESEARCH. The family has often been regarded as the cornerstone of society. In pre-modern and modern societies alike, it has been seen as the most basic unit of social organisation and one that carries out vital tasks such as socialising children. From the 1960s, an increasing number of critical thinkers began to question the assumption that the family was necessarily a beneficial institution. In the following decades the family was not just under attack from academic writers- social change also seemed to be undermining traditional families. Rising divorce rates, cohabitation before marriage, increasing numbers of single-parent families and single person households and other trends have all suggested that individuals may be basing their lives less and less around conventional families. In 'World Revolution and Family Patters' William J.Goode argues that many of the functions once performed by the family have been taken over by outside agencies such as schools, business and welfare organisations. This has greatly reduced the importance of the family in contemporary society. Fletcher however commences that the family has not lost functions for they were never performed to the standards of today. ...read more.

In addition the decline of t he extended family has meant that there is less pressure from the wider kin ton newly married couple to maintain traditional roles. From Young and Willmott's research, it was found that 72% of husbands did housework. However, in this regard Ann Oakley stated that even men who made a very small contribution to housework would be included in this percentage. She found out greater equality in terms of allocation of domestic tasks between spouses I the middle class than in the working class. However, in both cases few men had a high level of participation in housework and childcare. In the 20th Century the family has become smaller and this led to more individual attention to each other. Since in the 19th century the typical working hours were 70-80 hours per week, while today it is about 44, this meant that parents have more time to spend with their children. As a result of higher standards of living more money can be spent on children and their activities (clothing etc.). Today there has been a decline I average family size. This is due to more effective and cheaper methods of contraceptive have been developed in the 20th century, and even societies' attitude towards them has changed. ...read more.

This increase was mainly due to an increase of the rate of divorce and of unemployment and poverty. It was also because social attitudes towards the single parent family have changed and become more acceptable. Other forms of family diversity have developed or become more prominent. Gay and lesbian households may have become more common place, certainly there are more openly gay and lesbian households than there were several decades ago. As Jeffrey Weeks, Catherine Donovan and Brian Heaphey argue, 'During the past generation the possibilities of living an openly lesbian and gay life have been transformed' (Weeks, Donovan and Heaphey, 1999). Many sociologists believe that such households, where they incorporate long-term gay or lesbian relationships, should be seen as constituting families. However this contrasts with Murdock's definition of the family which contains 'adult of both sexes, at least two of whom maintain a socially approved s****l relationship'. The types of families we know today are quite different from those of the past. This is due to the changes in family patterns. However to sum up once can still say that about 95% of the people still marry, and have a family, regardless to the what type of family this is. (1,277 words) ___________________________________________________ ?? ?? ?? ?? 1 1 ...read more.