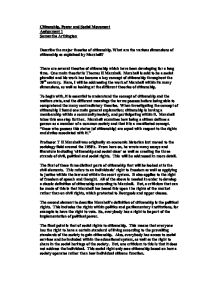 Also, everybody has access to social services and be included within the educational system, as well as the right to share in the social heritage of the society. But, one criticism to this is that it does not address the individual. This social right only sees citizenship based on how a society operates rather than how individual citizens function. From this, Marshall makes his main points of his theory. Marshall looks closely at the welfare state. The welfare state was originally a term to describe the social and political order, post-world war 2. Since then, the meaning of the term has changed and now refers to the social service state, according to Marshall, and tries to help citizens at the time when they are in financial trouble, rather than to help people to not need to rely upon the welfare state, as it initially set out to do. Marshall talks of the social liberalism as an important element to his theory and to citizenship. ...read more.

In my opinion Marshall is the most evolutionary theory in its complexity, especially as many other theories came before Marshall. The Marxist theory of the 1840's studied modern citizenship during the French and American Revolution. Marxists say that the limitations to citizenship can only be overcome through a "social revolution in which the class basis of inequalities in social conditions and power is overthrown." Class inequality would have to be defeated by the lower classes overthrowing the upper classes and taking over the power. Marshall was influenced by the Marxist theory, but still did not take into account class inequality within his own thesis. In conclusion, Marshall's theory has many various dimensions of citizenship. Whilst his theory is extremely complex and detailed, it does contain many defects and can be worthy of much evaluation and criticism. Marshall excludes essential facts of society, such as inequality, and has a clear-cut idea of how everyone can have full citizenship, when in reality this is not true. On the other hand, Marshall's work can be used as a basis of definition and his work has become a huge influence on the studies of citizenship. ...read more.