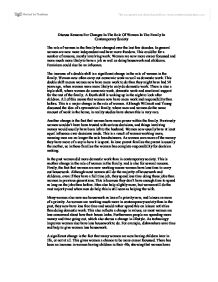 Discuss Reasons For Changes In The Role Of Women In The Family In Contemporary Society The role of women in the family has changed over the last few decades. In general women are now more independent and have more freedom. This could be for a number of reasons, mostly involving work. Women are now more career focussed and more much more likely to have a job as well as doing housework and childcare. Feminism could also be an influence. The increase of a double shift is a significant change in the role of women in the family. Women now often carry out economic work as well as domestic work. This double shift means women now have more work to do than they might have had 50 years ago, when women were more likely to only do domestic work. There is also a triple shift, where women do economic work, domestic work and emotional support for the rest of the family. ...read more.

In the past women did more domestic work than in contemporary society. This is another change in the role of women in the family, and is also for several reasons. Firstly, the fact that women are now working means women have less time to carry out housework. Although most women still do the majority of housework and childcare, even if they have a full time job, they spend less time doing these jobs than women in previous generations. This is because they don't have enough time to spend as long on the jobs than before. Men also help slightly more, but women still do the vast majority and when men do help this is still seen as helping the wife. Many women also now see housework as less of a priority now, and leisure as more of a priority. As women are working much more in contemporary society than in the past, they now have less free time and would rather spend this on leisure activities than doing domestic work. ...read more.

Women were less satisfied to stay at home and take care of domestic work instead of earning money. Changes in law, often due to liberal feminists, also affected this. For example the equal pay act meant women were equal in the workplace which made some women want to be more equal at home. In general womens rights are now seen as much more important by society, which is a major reason women are more independent. To conclude, the main reason for the change in role of women in the family in contemporary society is the fact that women now work much more. This means that women have less time to carry out domestic work and childcare, and therefore makes housework less of a priority, and in some cases means it is shared between the man and the woman more. Working more also means men are no longer the sole breadwinners so women often have more decision making power than in the past. Other factors in the change in role of women in the family in contemporary society are technology and changes in society in general, and societies views. ...read more.