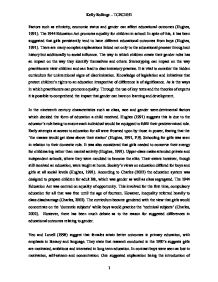 Diversity - Gender and education Factors such as ethnicity, economic status and gender can affect educational outcomes

Factors such as ethnicity, economic status and gender can affect educational outcomes (Hughes, 1991). The 1944 Education Act promotes equality for children in school. In spite of this, it has been suggested that girls persistently tend to have different educational outcomes from boys (Hughes, 1991). There are many complex explanations linked not only to the educational process throughout history but additionally to social influence. The way in which children create their gender roles has an impact on the way they identify themselves and others. Stereotyping can impact on the way practitioners view children and can lead to discriminatory practice. It is vital to consider the hidden curriculum for unintentional signs of discrimination. Knowledge of legislation and initiatives that protect children's rights to an education irrespective of difference is of significance. As is the ways in which practitioners can promote equality. Through the use of key texts and the theories of experts it is possible to comprehend the impact that gender can have on learning and development. In the nineteenth century characteristics such as class, race and gender were detrimental factors which decided the form of education a child received. Hughes (1991) suggests this is due to the educator's role being to ensure each individual would be equipped to fulfil their predetermined role. Early attempts at access to education for all were frowned upon by those in power, fearing that the 'the masses would get ideas above their station' (Hughes, 1991, P.9). Schooling for girls was seen in relation to their domestic role. It was also considered that girls needed to conserve their energy for childrearing rather than mental activity (Hughes, 1991). Upper-class males attended private and independent schools, where they were moulded to become the elite. Their sisters however, though still received an education, were taught at home. Society's views on education differed for boys and girls at all social levels (Hughes, 1991). ...read more.

To ensure that discriminatory practice does not transpire it is essential for practitioners to consider their own beliefs and values (Willan et al, 2004). In order to promote equal opportunities practitioners need to become aware of and deconstruct their own stereotypical thinking (Wilan et al, 2004). Malik (2003) suggests that stereotyping in a negative way can damage children's perceptions of themselves and others, denying them the chance to fulfil their potential. Stereotyping can lead to prejudice through preconceived ideas, it is this type of attitude that that often results in discriminatory practice (Malik, 2003). Haberman (1995, as cited in Cole, 2005) suggests that practitioners can follow five concepts order to overcome prejudice (See Appendix Two). It is through awareness of differences in people or groups that stereotyping, prejudice and discrimination can occur. However, it is also through valuing difference that inclusion and equality can be promoted (Malik, 2003). Malik (2003) suggests all children are different, not just through gender, social class or ethnicity but in every way. Individuality must be valued and encouraged. It is through developing this ethos in an educational setting that children can be taught to perceive difference as their own uniqueness but not their value (Malik, 2003). The National Curriculum details the promotion of self-esteem and emotional well-being as significant for children to value and respect themselves and others (DfEE/QCA, 1999). According to Maslow (1954, as cited in Bentham, 2002) self esteem is required before the process of learning can develop. Jean Piaget (1886-1980) states that children learn from their environment and through their own experiences (Walkrup, 2004). Therefore, the environment can be used to provide positive images of role models to children, through books, posters, equipment, role play areas, dressing up clothes and other resources. Children should be offered a wide range of activities and organisation for group activities by sex should be avoided (Skelton and Francis, 2003). Adults in the environment must be aware of appropriate communication to promote inclusion, but can also provide challenges to discriminatory behaviour in children by providing examples of equality. ...read more.