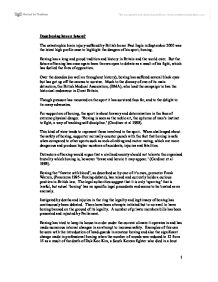 Does Boxing have a future?

Does boxing have a future? The catastrophic brain injury suffered by British boxer Paul Ingle in September 2000 was the latest high profile case to highlight the dangers of his sport; boxing. Boxing has a long and proud tradition and history in Britain and the world over. But the future of boxing has once again been thrown open to debate as a result of his fight, which has fuelled the fires of opposition. Over the decades (as well as throughout history), boxing has suffered several black eyes but has got up off the canvas to survive. Much to the dismay of one of its main detractors, the British Medical Association, (BMA), who lead the campaign to ban the historical endeavour in Great Britain. Though pressure has mounted on the sport it has survived thus far, and to the delight to its many advocates. For supporters of boxing, the sport is about bravery and determination in the face of extreme physical danger. 'Boxing is seen as the noble art, the epitome of man's instinct to fight, a way of teaching self-discipline.' (Gardiner et al 1998). This kind of view tends to represent those involved in the sport. When challenged about the safety of boxing, supporter normally counter punch with the fact that boxing is safe when compared to other sports such as rock-climbing and motor racing, which are more dangerous and produce higher numbers of accidents, injuries and fatalities. Detractors of boxing would argue that a civilised society should not tolerate the organised brutality which boxing is, however 'brave and heroic it may appear.' (Gardiner et al 1998). Boxing the "theatre with blood", as described so by one of it's own, promoter Frank Warren, (Panorama 1995- Boxing-debate), has raised and currently holds a curious position in British law. The legal authorities suggest that it is only 'sparring' that is lawful, but actual 'boxing' has no specific legal precedents and seems to be treated as an anomaly. ...read more.

Brain Key the chairman of the Society for Nursing People with learning disabilities claims boxing gloves, "aids in the infliction of considerable damage." (Hall 96). He considers that it is really unacceptable in a modern civilised society to promote and idolise one individual for his ability to perpetrate a violent assault upon his fellow. (Hall 96). "Boxing is safe when conducted in a controlled environment where proper safety standard have been laid down by the governing body and which are strictly adhered to." (English Sports Council- Now, Sport England). Not a claim with which Dr Vivianne Natherson of the BMA would agree with she says, "There is no safe level of boxing. Any blow to the head is harmful." (http://newb.thdo.bbc.co.uk/sport 18-12-00). In 1982 prompted over concerns of 'dementia pugilistica' and accumulating ring fatalities, the BMA, which then represented 80% and now 84% of the United Kingdoms doctors made a stand and called for the noble art to be put to bed, they called for the abolition of boxing in all forms. The BMA has repeatedly called for the sport to be banned arguing that any attempt to improve the safety measures at boxing matches as a waste of time. They accompany this argument with the claims of medical evidence relating to injuries of the brain, head, eye, nose, ear, breast and neck. They strongly refute and oppose the claim by what is now Sport England formerly the English Sports Council that the sport is in anyway safe. In there arguments the BMA points out it is the only sport where the intention is to inflict serious injury on your opponent and they feel as a result it must be banned. "Boxing is a unique sport that victory can be obtained by inflicting such physical injury on an opponent the he/she is unable to continue." (BMA Document 93). Despite their calls little has actually been done. ...read more.

The medical professions obsession with boxing and its campaign for its abolition may be more deep-rooted than at first thought. An obvious answer, if taboo, is that the campaign against boxing is to do with class sensibilities. As considered, the modern form of boxing has remained a predominately working class, lower socio-economic persons pursuit though it is perceived by a predominately middle class profession as somehow brutal, vulgar, and unnecessary, while so many other 'dangerous' activities are regarded as food for the soul. The debate about the legitimacy of boxing may have faced a brick wall currently, but the fight continues on moral grounds and on the grounds that in opponents eyes there is no place for a brutal sport in this day and age. Though defeated it will not remain uncontested in the future all it needs is a test case. It appears boxing does have a future even though it will face continuous periodical scrutiny from the opposition medical quarters. It seems that only a massive swing of public opinion against boxing will set in motion the moves which would consign it to the history books forever. The fears that boxing would be more dangerous if forced to go underground resulting in a ban is a factor maybe keeping it afloat. Unfortunately attempts will be further strengthen if and when the next tragedy occurs. Statistically boxing is safe. Anti-boxing protestors should consider the fact that boxers choose voluntarily to take part in the dangers of the sport. Unless people have this right taken away will any attempts be successful. Though boxing does seem to have a relatively safe future, an injury to a star name may set the balls in motion that may sway opinion. It is not out of the question that boxing will be changed in some respect, rule changes, such as fewer rounds, lighter gloves, and no punch zones including the head may be compromising concessions of the boxing authorities. Boxing has always and will always have its detractors, though the future of the noble art remains safe for the foreseeable future. ...read more.