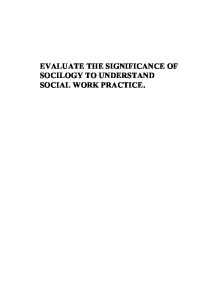 Evaluate the Significance of Socilogy To Understand Social Work Practice.

EVALUATE THE SIGNIFICANCE OF SOCILOGY TO UNDERSTAND SOCIAL WORK PRACTICE. Sociology comes from the Latin word 'socius', which means people and the Greek word 'logos', that means study of. Macaronis and Plummer (cited in Cree 2001:1) describe sociology as "the systematic, sceptical study of human sociology." By studying sociology we can gain an insight into why people have social problems and make sense of them by not necessarily blaming the individual. We can achieve this by looking at the societies that people live in and the roles that they play in that community. I will briefly describe the three main sociological perspectives and some more recent contemporary ones. I will also evaluate the significance of sociology to social work practice, in particular to older people and discuss ageism as a social problem. Sociology covers many subjects such as religion, class, ethnicity, s*x, race, education and crime to name but a few. Society is made up of social institutions such as the family, law and peer groups. These institutions are made up of different and diverse cultures that may share common values. Cultures are made up of values, norms, customs and each having their role and status in society. People are born into society and go through a process called socialisation. This is where cultures are taught and norms and values learned and become internalised, or taken for granted. Primary socialisation is the early years of learning, normally taught by parents or older siblings. Secondary socialisation is learned at school, though media, and peer groups and continues throughout life. Secondary socialisation is the process through which people develop their social identity and learn the roles they play in society. These roles are forever changing throughout life, such as daughter to wife and worker to retiree. There are many sociological perspectives, the main three being the functionalist perspective, the Marxist perspective and the social action theory. ...read more.

For instance women are still expected to be the homemakers and the division of labour within the home is still very unequal. Anti r****t or 'black' perspectives are concerned with the r****t assumptions and experiences of ethnic minorities in Britain. The term 'black feminism' is concerned with the oppression that 'black' women face through sexism and r****m. This is often termed as a double jeopardy as 'black' women may be oppressed for being 'black' as well as being a woman. "Postmodernalists believe that we are living in a vastly different society that was predicted by the early sociological writers (Cree 2000) as we live in a multi racial and cultural society and believe that many sociological ideas are becoming irrelevant. "Postmodern culture is also about mixing and matching seemingly contradicting style" Moore et al (2001:19). Each sociological perspective has its uses in understanding behaviour and explaining social problems, however each has its criticisms. Functionalists have been criticised for failing to explain conflicts and diversity and over emphasising social order. They have also been criticised for ignoring freedom of individual choices. Functionalists view the process of socialisation as never failing, which of course it can do. Some Marxists also ignore people's freedom of choices and put too much importance and emphasis on conflict. Social action theory is criticised, as the theory does not explain in detail who is responsible for demonstrating norms and power. A social problem is a problem in society that affects many people rather than individuals. A social workers role is to work in partnership with other organisations to alleviate these problems. The worker alone can't solve social problems. By using the term our sociological imagination, we can see that individual's problems; such as poverty are not necessarily that individuals' fault, but a problem in society. This includes taking a holistic approach and looking at the issues as a whole to aid people to improve the quality of their lives. ...read more.

Workers will often have to work on clients' self-esteem if they have been marginalized. Older people services are also often allocated lower budgets, therefore social workers may have to put their case to a panel to gain access to services that the clients need and deserve. Older people are tagged onto the same policies that are used generically for all adult social services clients, having little policy to protect from abuse. Neil Thompson (2001) describes how discrimination and marginalizing of clients affect circumstances of clients. He uses the PCS model. "P refers to the personal or Psychological." Thompson (2001:21) This is personal feelings and emotions, he also refers the P to practice. "Individual workers interacting with individual clients" (Ibid) C refers to the "cultural level of shared ways of seeing, thinking and doing." (Ibid) This sis our social norms and values of the society we live in. S refers to the structural level, the network of social divisions and the power relations that are so closely associated with them" Thompson (2001:22) It is also the way that discrimination is normalised in our society. This model can be used with all types of discrimination to illustrate the effects of discrimination not just on the individual but also on society. It can work back the other way as societies views and actions can affect the individual. As mentioned earlier, the social worker needs to be aware that their actions can add to marginalizing and discrimination and how others actions affects individuals and the community as a whole. "PCS analysis shows the different levels at which discrimination operates and how these reinforce each other. Thompson (2001:24) In conclusion, I have described the three main sociological perspectives and also briefly explained the more contemporary perspectives developed in the 20th century. I have demonstrated why applying theory is important to social work practice and discussed ageism as a social problem. I have outlined how discrimination affects individuals and the society as a whole and how social workers can assist to alleviate the problem. ...read more.