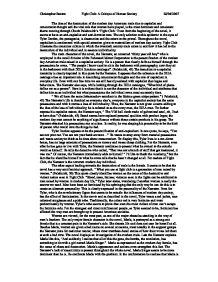 The idea of the destruction of the modern day American male due to capitalist and consumerist thought and the vital role that woman have played, is the most dominant and consistent theme running through Chuck Palahnuick's 'Fight Club.' Even from the beginning of the novel, it seems to have an anti-capitalist and anti-feminist tone. The only solution to this epidemic in the eyes of Tyler Durden, the protagonist, is destruction and the return to the primal. Throughout the novel, capitalism is condemned with special attention given to materialism of modern day society. Fight Club illustrates the consumer culture in which the twentieth century male exists in and how it has led to the destruction of the individual and in essence individuality. The main character of the novel, the Narrator, an unnamed "thirty year old boy" who is employed in the recall division of the Federated Motor Corporation is the personification of the modern day American male raised in a capitalist society. He is a person that clearly defines himself through the possessions he owns. " The people I know used to sit in the bathroom with p*********y, now they sit in the bathroom with their IKEA furniture catalogue". (Palahniuk, 43) The transition to a capitalist mentality is clearly depicted in this quote by the Narrator. It appears that the reference to the IKEA catalogue has an important role in describing consumerist thoughts and the role of capitalism in everyday life. ...read more.

The other aspect leading towards the destruction of male is the female. It seems to be that the novel has a very anti-feminist approach. " What you see at fight club is a generation of men raised by women." (Palahniuk, 50) This quote clearly identifies women as the cause of the destructive and violent nature seen in Fight Club. "Blood, tears, bruises; violence seen in the fights can be attributed to men raised by women in modern day life," Tyler later states, wondering if another woman is really the answer we need. Men have been so feminised by his upbringing that the only way he can do this is to create an alternate personality. This is clearly expressed in the personality of the Narrator. Even for Tyler, who is the revolutionary figure that seems to be outside the influences of modern day society, has the effect of feminisation. In the movie and as described in the novel, Tyler wears a red jacket, rose coloured sunglasses and a pink robe. Traditionally, the colour red is very feminine and worn predominately by women. Tyler's robe seems to prove that even the most violent of men can't escape his feminine side. For the strongest and most uninfluenced people, as Tyler seemed to be, feminism has affected the way men are brought up in present American societies. Women are viewed, for the most part, as one of the major obstacles standing in the way of men's freedom. ...read more.

Consumerism is directly linked to feminism. The woman's domain: shopping and the domestic world dominate today's society and not a week goes by where men are forced to shop in huge malls because of women. For this reason, feminism and capitalism are entirely linked. Fight Club is the man's struggle to gain control over his life. As with everything in life, there are many obstacles in the way of people's goals. To release the control of feminism and consumerism and to regain manhood, Fight Club was created. Fight Club let men live by liberating them and allowing them to express their primal nature. The twenty first century male still struggles with these issues, where consumer culture gives life value though what is bought and owned and not by the individual. What aids this destruction of the male along with capitalism is strengthened feminism in society. Fight Club portrays what sickens society today and what has caused it to be in the state it is in now. As society's priorities have become closer with material things, people are finding themselves more distracted and more alone with their material goods. This has caused the destruction of man. The novel is clever in its use of symbolism and words to detail its point to the reader. What Fight Club shows is the break down of modern day society and the only solution to this problem is drastic change and measure. Can Tyler Durden be our saviour? Time will only answer this question. Christopher Beeton Fight Club: A Critique of Human Society 28/04/2007 ...read more.