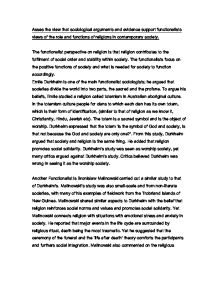 Asses the view that sociological arguments and evidence support functionalists views of the role and functions of religions in contemporary society. The functionalist perspective on religion is that religion contributes to the fulfilment of social order and stability within society. The functionalists focus on the positive functions of society and what is needed for society to function accordingly. Emile Durkheim is one of the main functionalist sociologists; he argued that societies divide the world into two parts, the sacred and the profane. To argue his beliefs, Emile studied a religion called totemism in Australian aboriginal culture. In the totemism culture people for clans to which each clan has its own totem, which is their form of identification, (similar to that of religion as we know it, Christianity, Hindu, Jewish etc). The totem is a sacred symbol and is the object of worship. ...read more.

Yet he suggested that the ceremony of the funeral and the 'life after death' theory comforts the participants and furthers social integration. Malinowski also commented on the religious rituals such as fishing activities. Malinowski concluded that religious rituals functioned to reduce anxiety and provide a feeling of control. Another functionalist believer is Talcott Parsons; he believes that religion is an institution which is a significant contributor to the norms and values of society. Parsons argues that Religion helped form the value consensus which is needed for stability in society. Parsons expanded on this by adding that the Ten Commandments act as a moral and ethical foundation. Like Malinowski, Parsons expressed that Religion acts as a mechanism to come to terms with when people die, by restoring a normal pattern to life. Parsons commented on his belief that religion provides answers. ...read more.

Marxists believe that the promise of heaven and eternal life is to soften the blow of exploitation of their lives on earth. It gives the idea that those who suffer in misery will be rewarded in the end with heaven. A quote which coincides with this ideology is that of, " it is easier for a camel to pass through the eye of a needle, than for a rich man to enter the kingdom of heaven". Both perspectives suggest totally different elements of religion. The Functionalists argue that religion is needed for society to function as it provides the norms and values, whereas on the other hand, the Marxist perspective argues that religion is a capitalist stunt to reinforce class inequalities. However, although both express different arguments, they both portray a similar aspect. Both perspectives suggest that religion and the 'eternal life of heaven' are used to comfort people during their life on earth. ...read more.