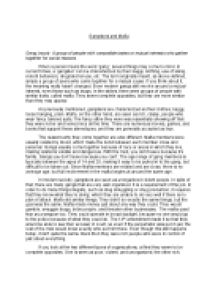 ﻿Gangsters and Mafia Gang (noun): A group of people with compatible tastes or mutual interests who gather together for social reasons. When a person hears the word ?gang?, several things may come to mind. In current times, a ?gangster? can be characterized by their baggy clothing, use of slang, violent behaviors, drug/alcohol use, etc. The term originally meant, as above defined, simply a group of peers who came together for a mutual cause. If you think about it, the meaning really hasn?t changed. Even modern gangs still revolve around a mutual interest, even those such as drugs. In the sixties, there were groups of people with similar traits, called mafia. ...read more.

With the mob, you don?t leave because it?s family. Gangs you don?t leave because you can?t. The age range of gang members is typically between the ages of 14 and 20, making it easy to be pulled in to the gang, but difficult to be taken out. Since Mafia members are related and are close, there is no average age, but full involvement in the mafia begins at around the same age. In modern society, gangsters are seen as unorganized violent people. In spite of that, there are many gangs that are very well organized. It is a requirement of the job. ...read more.

Even though this still happens today, it isn?t quite the same. Back then they were rich people who were in control of just about everything. If you look at the two different types of organizations, at first they seem to be complete opposites. One is seen as poor, violent, and unorganized; the other rich, powerful, and in control. Other than looking at what they appear to be, they are actually quite the same. Both can be very violent, well organized, and threatening. They both smuggle drugs and are in it for the money. Sure there are minor differences in the way they operate, but those are simple technicalities in the grand scheme of things. All though they might look like complete opposites, there are many other things that contribute to their overall character. ...read more.