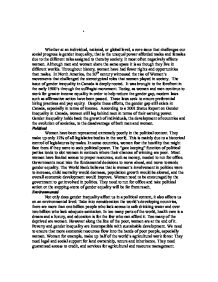 Gender Inequality Whether at an individual, national, or global level, a core issue that challenges our social progress is gender inequality, that is the unequal power afforded males and females due to the different roles assigned to them by society. It most often negatively affects women. Although men and women share the same space it is as though they live in different worlds. Throughout history, women have had fewer rights and opportunities than males. In North America, the 20th century witnessed the rise of Women's movements that challenged the stereotypical roles that women played in society. The issue of gender inequality in Canada is deeply rooted. It was brought to the forefront in the early 1900's through the suffragist movement. Today, as women and men continue to work for greater income equality in order to help reduce the gender gap, modern laws such as affirmative action have been passed. These laws seek to ensure preferential hiring practices and pay equity. Despite these efforts, the gender gap still exists in Canada, especially in terms of income. According to a 2001 Status Report on Gender Inequality in Canada, women still lag behind men in terms of their earning power. Gender inequality holds back the growth of individuals, the development of countries and the evolution of societies, to the disadvantage of both men and women. ...read more.

Given a preference for boys over girls that many male-dominated societies have, gender inequality can manifest itself. Take into consideration parent's preferences for their newborn to be a boy rather than a girl. With the availability of modern techniques to determine the gender of the foetus, sex-selective abortion has become common in many countries. It is particularly prevalent in East Asia, in China and South Korea in particular, but also in Singapore and Taiwan, and it is beginning to emerge in India and South Asia as well. Although this does not seem like a form of gender inequality, it in fact is. The affects of such inequality are beginning to emerge in places such as China, where the gender gap is so huge that many males are having a large problem finding female mates. Yet another problem is the limited access for women to health care and educational needs. The United Nations Development Fund for Women (UNIFEM) states that 70% of people living in poverty are women. This is an extremely outrageous amount! As gender inequalities continue, more women are being affected by the epidemic as a result of this limited access to education, health-care facilities, prevention programs, self sustaining employment and the influence of social; norms on the role of women. ...read more.

According to the UN Commissioner for human rights, the literacy rate for women worldwide is 71%, while it is 84% for men. However, in developing counties, the literacy rate for women is only 39%, as opposed to almost 60% for men. Of the 130 school aged children world wideii Gender mainstreaming aims to increase opportunities for women through training, information sharing, and education. This has resulted in increased female literacy rates and greater numbers of women working in civil service. The CEDAW adopted by the UN General Assembly in 1979, is credited with having created the first international bill of rights for women. In it, there are definitions of gender discrimination, and legally binding obligations for member states. This document has proven useful by incorporating equality into the legal system and establishing tribunals and institution to protect women against discrimination. The Gender Gap is much wider than is commonly believed. Women's incomes are 61% of men's, according to a special run of the latest Statistics Canada Survey of Labour and Income Dynamics (SLID). New, previously unpublished findings from the study reveal that despite years of trying to close the gender gap, women in Canada are very far from achieving economic equality. i www.usc.mun.ca ii Fraser Cartwright. On the Threshhold, Analysing Canadian and World Issues, p295-297 ...read more.