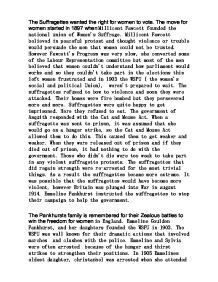 The Suffragettes wanted the right for women to vote. The move for women started in 1897 when Millicent Fawcett founded the national union of Women's Suffrage. Millicent Fawcett believed in peaceful protest and thought violence or trouble would persuade the men that women could not be trusted. However Fawcett's Progress was very slow, she converted some of the Labour Representation committee but most of the men believed that women couldn't understand how parliament would works and so they couldn't take part in the elections this left women frustrated and in 1903 the WSPU ( the women's social and political Union), weren't prepared to wait. The suffragettes refused to bow to violence and soon they were attacked. Their homes were fire bombed but they persevered more and more. Suffragettes were quite happy to get imprisoned. Here they refused to eat. The government of Asquith responded with the Cat and Mouse Act. When a suffragette was sent to prison, it was assumed that she would go on a hunger strike, so the Cat and Mouse Act allowed them to do this. This caused them to get weaker and weaker. When they were released out of prison and if they died out of prison, it had nothing to do with the government. ...read more.

Thomas Paine was born in Thetford, England, on January 29, 1737. Tom turned out to be a poor student, despite his father's best hopes, and flunked out at age 12. An attempt to follow in his father's footsteps at the corset shop also failed eventually Like many young men of the age, Tom wanted adventure. He found it at age 19, when he went to sea. After a few years at sea he soon realised he that travelling wasn't his cup of tea, the returned to England and became a tax officer. In that time he got fired twice, but he began to write The Case of the Officers of Excise. He met Benjamin Franklin, 2 years later, a famous publisher who helped him to get out of America and to Philadelphia. His first writing was "African Slavery In America" , a condemnation of slavery. Paine published a defence, titled "The Rights of Man". This paper named Thomas Paine as an outlaw and an order that he was arrested. Paine escaped England and went to France, to join the Revolution. When King Louis XVI was killed, Paine found himself on the wrong end of public opinion again when he didn't approve of the killing. ...read more.

It what he read Henry David Thoreau's "Civil Disobedience", which inspired his principle of non-violence. He returned to India in 1891. But two years later he left again, this time for South Africa where he was to stay for 20 years. He was the country's first "coloured" lawyer to be admitted to the bar. Deeply troubled by the country's racism towards Indians, he founded the Natal Indian Congress to agitate for Indian rights in 1894. India finally won independence in 1947. But for Mahatma Gandhi, triumph was tempered with disappointment over the violent partitioning of the country into India and Pakistan. But the alternative to partition was thought to be civil war between Hindus and Muslims, and so at the last minute Gandhi urged the Congress Party to accept partition. When he saw the extent of the bloodshed, Mahatma Gandhi again turned to non-violent protest. He went on a hunger strike, saying he would not eat until the violence stopped and India gave back the 550 million rupees (about �40m) that it was holding from Pakistan. But his efforts to achieve reconciliation between Hindus and Muslims eventually brought him death. He was assassinated by a fellow Hindu, Nathuram Godse, who felt that Gandhi had betrayed the Hindu cause. Mahatma Gandhi, aged 78, was on the way to a prayer meeting, when he was shot three times in the chest and died on January 30, 1948. ...read more.