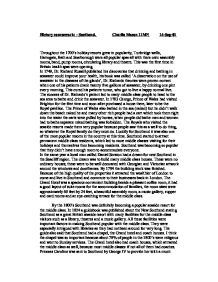 History coursework: - Southend. Charlie Mason 11MN 14-Sep-01 Throughout the 1700's holiday resorts grew in popularity, Tunbridge wells, Harrogate, Bath and Scarborough were all popular spas all with there own assembly rooms, band, pump rooms, circulating library and theatre. This was the first time in Britain health spas were opening. In 1749, Dr. Richard Russell published his discoveries that drinking and bathing in seawater could improve your health, his book was called 'A dissertation on the use of seawater in the diseases of the glands', Dr. Richards theories were proven correct when one of his patients drank twenty five gallons of seawater, by drinking one pint every morning. This cured his patients tumor, who got to live a happy normal live. The success of Dr. Richards's patient led to many middle class people to head to the sea area to bathe and drink the seawater. In 1783 George, Prince of Wales had visited Brighton for the first time and soon after purchased a house there, later to be the Royal pavilion. The Prince of Wales also bathed in the sea (naked) but he didn't walk down the beach naked he and many other rich people had a cart which took them right into the water the carts were pulled by horses, when people did bathe men and women had to bathe separate mixed bathing was forbidden. The Royals who visited the seaside resorts made them very popular because people saw this as a well to do thing, so whatever the Royal family do they must do. Luckily for Southend it was also one of the most popular resorts in the country at this time. Southend started to attract permanent middle class residents, which led to more middle classes visiting for their holidays and themselves then becoming residents. Southend was becoming so popular that they didn't have enough room to accommodate everyone. In the same year a local man called Daniel Scraton had a dream for new Southend in the Seacliff region. ...read more.

wooden structure opened in June 1830 but, as it was unusable at low tide, this soon required an extension. By 1833 Southend Pier had almost tripled in length, and by 1846 had become the longest pier in Europe, stretching for nearly a staggering 7,000ft (2,133.6m). However, this work resulted in financial problems for the pier owners, and they were forced to sell in 1846 for the sum of �17,000. Several changes of ownership followed until, in 1873, Southend Pier came into public hands, being purchased for �12,000 by the local board. Life was about to change in the quiet Essex resort. With the sudden advent of the railways, Southend was now accessible to the more boisterous folk of East London and it soon adopted the affectionate nickname of 'Whitechapel by Sea'. Much discussion took place regarding the future of the pier and in 1885 it was decided that a new iron pier should now replace the original ageing structure. Designed by James Brunlees, work on the new Southend Pier commenced in 1887 and was opened on 24th August 1890, complete with an electric railway. Various extensions and improvements over the next 30 years ensured that the pier kept pace with visitor requirements. These included an extension to the pier head in 1897, increasing the pier's overall length to 7,080ft (2,145m) - a world record for a pier. An upper deck to the head was opened on 25th July 1908, and the eastern 'Prince George Steamer Extension' was added in 1929. During the war years Southend Pier was taken over by the Admiralty, and was renamed HMS Leigh. The pier's role was primarily to serve as a convoy assembly point, and in the ensuing six years of conflict some 3,367 convoys, representing 84,297 vessels, sailed from Southend. At the end of the war the pier enjoyed it's heyday, with the electric train carrying some 4,713,082 passengers during the 1949/50 season, plus an additional 1,000,000 visitors coming through the turnstiles. ...read more.

they were easier to drive and maintain and used locally generated electricity. These points were not lost on the management of Southend's trams at the time that the future of the truncated Prittlewell tram route was being examined. Because of the short length of the route a frequent service was needed to attract passengers but the line was single track with only one passing loop, limiting the service that could be run. Doubling the track was an expensive option that the Council could not afford and therefore it was decided to supplement the tram service by superimposing trackless vehicles. The Corporation did not at that time possess the statutory powers necessary to operate trolleys, but it was able to persuade the Ministry of Transport to permit a one-year experiment; subsequently the Corporation Act of 1926 gave Southend permanent powers to operate the Trams. Conclusion Over all I think Southend was a big success with the middle class, even bigger with the working class, mainly because they got great value for money. There was also hundreds of thing to do on the Pier, Marine Parade and the Kursaal not to mention bathing in the sea. Southend's success wouldn't have been as big as it was if it wasn't for the steam boat and Railway especially the train because it cut down an eight hour journey down to a one hour journey from London. Southend was no doubt a popular resort for over a hundred years with both working and middle class. Now Southend is an old run down seaside resort and as they would have said back then unfashionable. Daniel Scraton had a dream and that dream came true. The dream was to make Southend a popular and fashionable resort in the nineteenth and the twentieth century with the help of others Southend had two great hotels the Royal and the Palace, the longest Pier in England, Marine Parade: a great stretch of land full of entertainment for both working and middle class. They really made Southend the 'IT' resort. ...read more.