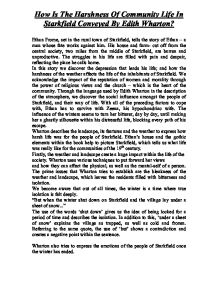 How Is The Harshness Of Community Life In Starkfield Conveyed By Edith Wharton?

How Is The Harshness Of Community Life In Starkfield Conveyed By Edith Wharton? Ethan Frome, set in the rural town of Starkfield, tells the story of Ethan - a man whose fate works against him. His house and farm- cut off from the central society, two miles from the middle of Starkfield, are barren and unproductive. The struggles in his life are filled with pain and despair, reflecting the place he calls home. In this story we discover the depression that leads his life; and how the harshness of the weather affects the life of the inhabitants of Starkfield. We acknowledge the impact of the reputation of women and morality through the power of religious views and the church - which is the heart of the community. Through the language used by Edith Wharton in the description of the atmosphere, we discover the social influence amongst the people of Starkfield, and their way of life. With all of the preceding factors to cope with, Ethan has to survive with Zeena, his hypochondriac wife. The influence of the winters seems to turn her bitterer, day by day, until making her a ghastly silhouette within his distressful life, blocking every path of his escape. Wharton describes the landscape, its features and the weather to express how harsh life was for the people of Starkfield. Ethan's house and the gothic elements within the book help to picture Starkfield, which tells us what life was really like for the communities of the 19th century. Firstly, the weather and landscape create a huge impact within the life of the society. Wharton uses various techniques to put forward her views and how they can affect the physical, as well as the mental-self of a person. The prime issues that Wharton tries to establish are the bleakness of the weather and landscape, which leaves the residents filled with bitterness and isolation. We become aware that out of all times, the winter is a time where true isolation is felt deeply. ...read more.

The 'warm and bright' shows the warmth in the room. This is quite the opposite of the 'deadly vault' described before. The 'geranium pots' explain the life within the house, however, the graves symbolized death before and are the total opposite of life. Overall, we can see that Wharton's aim to show the great contradictions between the atmosphere brought by Mattie and Zeena tells us why the people had harshness within their lives. Ethan's personal life is a symbol for the lives of the rest of the community. We find that Zeena's presence creates a lot of isolation, nevertheless; Mattie melts this isolation and adds warmth in to Ethan's life. Therefore, this tells us that the hardships in the community's life were because they lacked the presence of someone like Mattie. The representation of women is a strong theme which Wharton displays throughout her book. Through this, she conveys the harshness of life in the 19th century, and the force of the church on morality and women's rights. Consequently, we can compare the life of the 19th century with that of today. From having read the book, we can consider the duties of the women, which were thought to be necessary. For self-respect and respect in the eyes of the society The female-inhabitants of Starkfield had duties and jobs within their lives; which lacked choice and opportunity. If disregarded, the society would look down upon the one stepping out of the boundaries, set by the community. These strong opinions were due to the power of the church; therefore as every resident was church obeying, religion played a key role in their lives. From the following quote, we find that the duties of the women and what they had to do to be recognized as decent women in the community. "...women did what they could do preserve a decent dignity..." The word 'preserve' explains the importance they held on their respect. ...read more.

It should have been this reason which left Mattie and Ethan horribly injured instead of dead. Again, Ethan had no way to prevent the picture from appearing infront of him...Was it fate? "But suddenly his wife's face...thrust itself between him and his goal, and he made intensive movement...the sled severed in response. In analysis to this, I think that Ethan Frome is a man who makes many mistakes in his life and some due to the force of the society. At the end of the day, fate only shapes it deeper for him. Ethan is a symbol of the people of Starkfield and the harshness he faces, the mistakes he makes and the problems he gets into, sums up the life of the rest of the community. In conclusion to this essay, we learn that the harshness of Starkfield occurs due to the weather and landscape, the strict church and the regard of self respect that people cherished. Wharton, in many ways, tries to explain not only the issues for the people in the book, but also the life in the 19th Century (the time at which this book is based in). We also know that this book is based on the middle class people, a realist novel. It is definitely not a society novel, one of Wharton's common types; but a regional novel that explains the lives of the 'common' people. Compared to our lives, the middle class people in the early 1900s were much poorer than the middle class of today. We also know that this novel is combined of romance and gothic elements and therefore is a bit of both. The romance being Ethan's affair with Mattie and the hatred he had with Zeena. Furthermore, the gothic elements are the descriptions of Ethan's house, his wife (who shows madness and exhibits extreme behavior) and his farm (which is a remote and haunted-like place) and also the dark secret about the affair. These different styles that Wharton uses are to increase the impact of her views of the life in the 19th Century, conveyed in her book 'Ethan Frome'. ...read more.